I have only visited Hartlepool once before and that was to watch the mighty Tamworth FC create a 'giant killing' shock and knock Hartlepool United out of the FA Cup.  Would my second visit to this town prove just as memorable and enjoyable?  As I made my way to the headland, news of a RADDE'S WARBLER came through from the Jewish Cemetery.  I decided to head to The Croft first though in order to check out a long staying Lanius species.  Every birder loves a shrike!  Upon arrival there was no sign of the bird amongst the plethora of Goldcrests and Chiffchaffs but after a short while the juvenile WOODCHAT SHRIKE (289) finally made an impressive entrance.  To my surprise it flew straight towards me with a freshly deceased Goldcrest in its bill.  It then tucked itself into cover where it could be glimpsed decapitating its prey, wedging the body in between two small branches and ripping it to shreads.  It was like a scene from the movie 'SAW'! 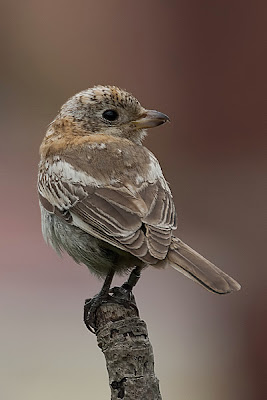 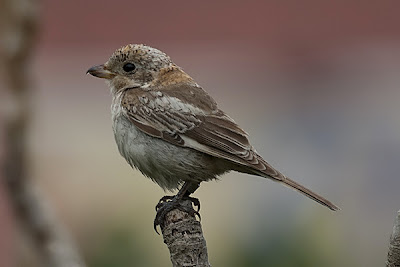 With no sign of the Yellow-browed Warbler or the Firecrest which had been present in The Croft earlier in the day, I decided to head across to the Spion Kop Cemetery where the RADDE'S WARBLER had been re-identified as a DUSKY WARBLER.  As I arrived on site it did not look good.  I was told that that the bird had been disturbed by over eager twitchers and had promptly disappeared from its favoured feeding area.  Undeterred I decided to take a stroll further along the track overlooking the rugby club and within a few minutes I detected a distinctive 'tak.... tak.... tak' call.  With the help from another birder I managed to catch a glimpse of the bird responsible for the sound, a fine DUSKY WARBLER (290).  After a bit of patience the bird showed very well indeed but was easily spooked and disappeared for long periods.  As with the previous day at Spurn, my day of birding had ended with a bang.  I now have just ten species to go until the target of 300 is smashed! 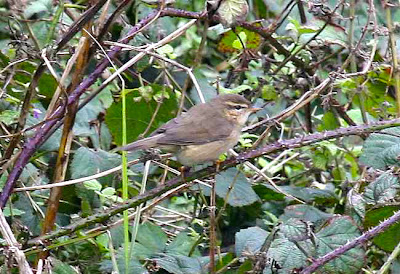