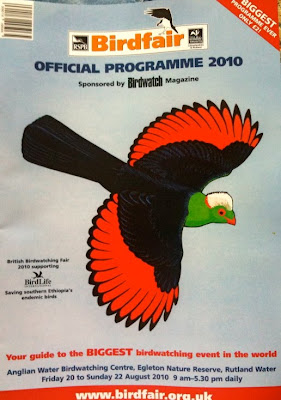 So it's that time once more, "Glastonbury for birders!" as some joker once exclaimed. If you're heading to Rutland Water in a few weeks though, don't expect to see Lady Gaga strutting her stuff or the Kings of Leon strumming away. The best you're going to get is some random collection of Africans playing a bit of World Music or the odd South American blowing away at his pan-pipe. The only similarity with the aforementioned Somerset music festival really is the plethora of over privileged, middle-class halfwits milling around the place. This time though the jester hats are replaced with Tilley Hats and 'class A drug cocktails' are substituted with blood pressure tablets and Viagra. It is a fact that more cash is extracted from the silver-haired brigade at this event than Saga Car Insurance and Stannah Stair Lifts combined.
On a more serious note, if you can stomach Penelope from Windsor faffing around, blocking up the aisles with her Scopac or Henry from Thornham waffling on about seeing Shoebills during his last trip to Uganda, then there is some pretty good stuff to enjoy. Some of the lectures are particularly smart. My tip would be to work out exactly which ones you fancied beforehand and stick to the plan. Also make sure you arrive early enough as some of the popular ones get pretty full. One thing you must avoid however is 'Just A Linnet' in the main events marque. Back in the day when 'Odd Billie' hosted the show it was very funny indeed, he really didn't care who he offended along the way with his aviform related sarcasm. He will always be a comedy hero of mine. These days however it's a different story. Instead you will have to put up with the arrogance of former Kajagoogoo front man Chris Pacman and that other TV show presenting, simpleton Mike Bilger for sixty minutes of blatant showing off. Head to the beer tent instead and knock back a few pints of real ale. 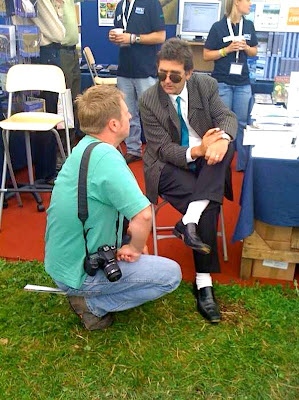 Lee GR Evans gets quizzed by a journalist from the I
rish Times r
egarding his peculiar theory that the free states in the south of Eire are part of the United Kingdom. Notice how our dear LGRE is still wearing his deep-vein thrombosis tights after his extensive whistle-stop flying tour of prime Western Palearctic birding sites.
Another reason to head to Birdfair is that you can save a small fortune on birding literature. I tend to make a list of stuff I wanted to buy over the course of the year and use an American Express freshly pick-pocketed from one of the affluent punters milling around the Swarovski stand to pay for the lot. I've also found that the best savings to be had are at the Wildsounds stall but be prepared to shop around for that ultimate bargain. If you grow tired (and envious) of all those making enquires about over-priced foreign birding tours then why not head over to the Art Marquee and immerse yourself in a spot of .... well art.... canvas under canvas style. Please note that it's customary whilst negotiating this particular marquee to stroll around extremely slowly and silently with your hands behind your back. Every now and then pause for a while and nod appreciatively at the artist/photographer/sculptor. If you wear glasses why not add to the effect by lifting your spectacles and squinting at your favourite pieces. If you sport a beard then feel free to rub away at it as though you're pondering an imaginary puzzle.
If you're heading over folks then enjoy yourselves, spend loads of cash and join as many wildlife based charities as you can if you're not members already. No birder should be allowed to embark on a six week tour of the Antarctic unless they are paid up members of the RSPB, BTO, WWT, Birdlife International and their local Wildlife Trust at the very least. 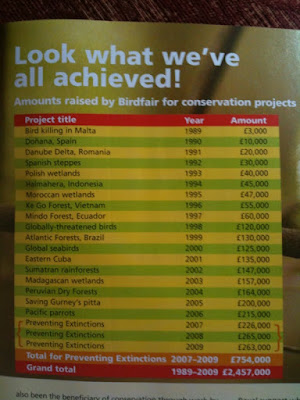 These statistics speak for themselves! See how much the organisers have managed to extract from us over the years.... Tim Appleton (LRWT) and Martin Davies (RSPB) are just like a modern day Robin Hood and Maid Marion! Keep up the great work fellas.
Posted by archiesbirding.blog at 14:53