Walton Heath, Somerset.
Today's trip started at 3.00am in Warwickshire with Jules Allen, Stevie Dunn & Mike Feely joining me for another trip down to the south west. We arrived at Ashcott Corner at around 6.00am and it didn't look good. Despite the wind from yesterday subsiding it was raining pretty heavily, not ideal for attracting a secretive, miniature Heron from the shelter of a reedbed. 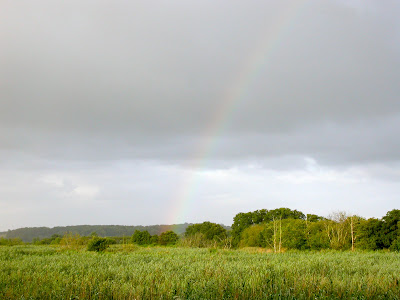 Loxton's Marsh, Walton Heath, Somerset.
Notice how the end of the rainbow stops at the suspected Little Bittern breeding site.... pure gold!
After getting soaked to the skin we finally caught a quick glimpse of a female LITTLE BITTERN (249) in flight at 7.10am. It then showed a further three times during the next five minutes with it flying off strongly and out of sight on its last appearance. The same bird then returned and showed several times in flight between 8.10am and 8.15am, with it showing perched up in the phragmites briefly. She then went missing around the suspected nest site until 9.00am when she once more flew a short distance several times before showing well perched up for a few minutes. As earlier in the morning the bird then flew off strongly towards another reedbed, hopefully to search for food for any chicks. Whilst at the locaton we did not see the male LITTLE BITTERN that had been present earlier on in the month.
Other sightings included 2 Great Bitterns, 4 Little Egrets, 2 Hobby and a family party of Cetti's Warblers amongst the usual suspects. We then headed over to Noah's Lake but we failed to locate the GREAT WHITE EGRET that has been present in the area on and off for a while. We then searched the cow fields around the area for any lingering CATTLE EGRETS but for the second time this year we were unsuccessful. 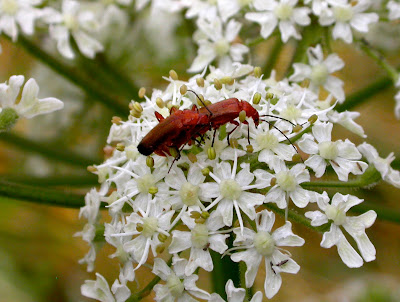