After a stressful week of being embroiled in a whole load of birding political nonsense it was nice to get back to actually watching a few birds.  The morning started off at home taking part in the RSPB Big Garden Birdwatch with my daughter.  The total was way down on previous years with just 13 species recorded in the allocated hour.  A male Reed Bunting was the highlight but it was pretty disappointing not to have spotted the usually guaranteed Coal Tit, Bullfinch and Siskin.  It still depresses me that both Starling and House Sparrow have never been recorded in my garden whilst I've taken part in this survey.
During the afternoon I then drove the short distance to Pelsall where a juvenile BLACK-THROATED DIVER was present for its third day at Clayhanger Marsh.  This bird was initially thought to be a Great Northern Diver on its first day in the West Midlands.  The bird then caused a bit of a stir yesterday when close up views revealed a pretty distinctive chin-strap, a feature normally associated with the much rarer PACIFIC DIVER.  All other features however are consistent with Black-throated Diver and getting to see the bird in the flesh confirmed this identification even more. 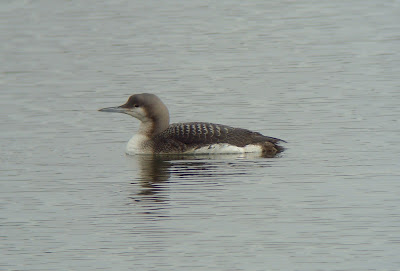 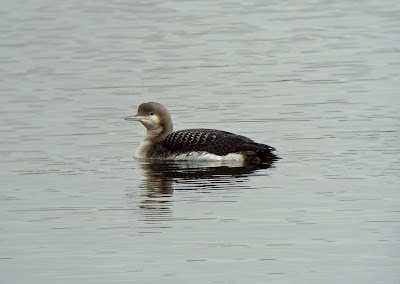 Other birds around Ryder's Mere included 4 Goosander as well as the usual selection of more common wildfowl such as Gadwall, Eurasian Wigeon, Common Teal, Mallard, Common Pochard and Tufted Duck.
Posted by archiesbirding.blog at 23:14 2 comments: 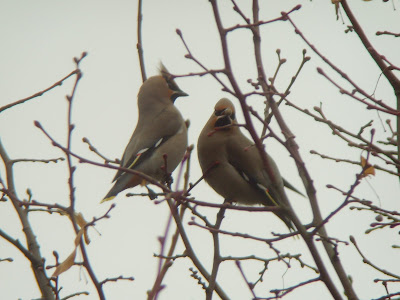 A pair of Waxwings taking part in a spot of berry swapping.
Grendon, Warwickshire - January 2011
After spending over three weeks suffering from 'pig flu' and following the death of my beloved Nikon Coolpix 4500 camera I've found it pretty tough to get 'blog motivated' just lately.  Now I'm back to full fitness though and after securing a bargain Samsung NV3 on e-bay, I'm hoping that those dark days of birding depression are behind me.... as long as I don't dwell on dipping the Slaty-backed Gull too much!
This morning I thought I'd venture out and try my new camera on a few common birds just to get a bit of practice in before any rarities start turning up.  Before I did though I drove the short distance to Grendon to see if there were any Waxwings knocking around the berry laden trees on the St Nicholas housing estate.  My persistence at this site was at last rewarded when a small group were located without even leaving the car.  In total there were 19 birds present.  Unfortunately the dingy weather conditions were not great for digi-scoping but I was quite happy with my initial shot using the new camera, hand-held up to my scope.  All I need now is a bit of sunshine and an adaptor and hopefully the photos will improve.
Posted by archiesbirding.blog at 10:49 No comments: