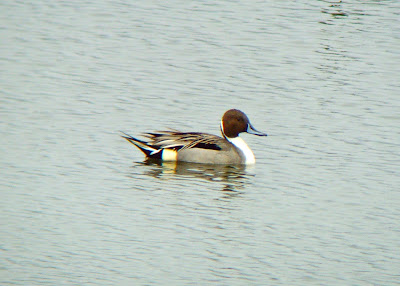 Northern Pintail (male) - Ladywalk Nature Reserve, Warwickshire
After being cooped up in the office all week and missing out on the beginning of Spring, I was keen to get out early this morning. There had been outbreaks of glorious sunshine on and off while I was at work but typically the weather had changed for the worse now it was the weekend. Due to the rain bucketing it down I needed to choose a birding place with a degree of shelter, so I though I'd give Ladywalk a try.
Around the car park a flock of 15 Lesser Redpoll were nice to see around the feeders along with the odd Siskin and 4 Bullfinch. There was also an interesting looking melanistic Great Tit knocking around. From the Sainsburys Hide the highlights were a Bittern showing well in flight before disappearing back into the reedbed and a Great Spotted Woodpecker using the exterior of the hide as a drumming post! Other sightings included a Willow Tit, a flighty flock of 30 Siskin, another 5 Lesser Redpoll and 2 female Brambling.
From the Riverwalk Hide a male Pintail and 21 Goosander were present amongst the usual wildfowl as well as 4 Oystercatcher and 22 Lapwing. Also in the area at least 2 Cetti's Warblers were heard and the resident Tawny Owl could be seen in his usual position. All in all a very enjoyable morning indeed especially as I had the entire reserve all to myself. Access is strictly by permit holders only via a locked gate. If you are local and fancy paying Ladywalk a visit please click HERE for access details. 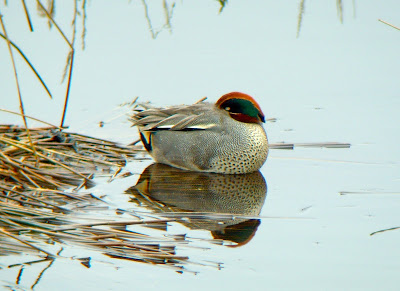 'Tart The Gyr' by Gyr Crakes

The eagerly awaited followed up to 'Thou Shalt Always Bird' by the Puff Daddy of Birding.... Gyr Crakes.... enjoy!

Posted by archiesbirding.blog at 21:02 No comments:

It's always great to head over to the North Norfolk coast at this time of year, especially during the week when the birder numbers are greatly reduced.  We arrived on site at a grey and blustery Thornham Harbour just after 8.00am in the hope that we would find the juvenile male NORTHERN HARRIER that had been spending the winter in the area.  I had previously connected with this American rarity late last year just a short way east along the coast at Burnham Overy Staithe.  The views however were not that close and the subtle differences between this form and the more familiar Hen Harrier of Europe were not that obvious.  A distant 'ringtail' Harrier was picked up far off over Titchwell RSPB reserve but unfortunately it failed to stray any closer.  There were plenty of Marsh Harriers to enjoy though along with a single Little Egret, a hunting Barn Owl and hundreds of Pink-footed Geese passing overhead.
In order to get the circulation going in our frozen bodies we then decided to take a brisk stroll along the coastal footpath to Holme.  From our viewpoint in the dunes up to 35 Bar-tailed Godwit were seen probing the tideline along with the odd Grey Plover, Dunlin and Sanderling.  Out on the sea there were good numbers of Red-throated Diver as well as a single Red-breasted Merganser and a Razorbill.  A small flock of 10 Snow Buntings also made a brief appearance flitting their way along the beach.  With the heavens opening, we decided to head back to the car at pace and a find a place to eat breakfast.  A veggie special and a pot of tea hit the spot at the impressive cafe at Burnham Deepdale and to make matters even better, the rain shower seemed to fizzle too.
With the weather improving we took the coast road east to Salthouse where we enjoyed point-blank views of both Snow Buntings and Turnstones feeding around the car park.  It was then a short drive back west to Cley where a drake AMERICAN WIGEON eventually showed amongst the flock of grazing Eurasian Wigeon just east of the East Bank.  Walking up the the shingle ridge we were soon watching our first of 9 Shorelarks that were present.  Attempts at digiscoping them with my new set up proved hopeless in the dim light and windy conditions.  Out at sea Red-throated Divers were noticeable again and out on the NWT reserve there were two pairs of Marsh Harrier displaying.
After a scan through the large numbers of Brent Geese at Holkham we then continued across to Burnham Overy Dunes.  From the small cark park situated on the A149 I soon picked up what looked like a juvenile ROUGH-LEGGED BUZZARD perched up on a distant post in the mid afternoon sunshine.  A stroll north along the muddy track finally clinched the identification for certain as the bird showed pretty well flying short distances from fence post to fence post.  It was in this area that the winter goose spectacle kicked in with thousands of Pink-footed Geese passing over along with much smaller numbers of Greylag Geese and Brent Geese.  Hunting Barn Owls continued to impress with yet another four birds present in the area, two of which showed down to just a few yards.  Always an awesome sight.
With the day fast running out we decided to finish our memorable day of birding where we had started it, at Thornham Harbour.  This time though our luck was in.  I had just set up my scope when a harrier suddenly appeared hunting over the saltmarsh.  Upon closer scrutiny it appeared to be the juvenile NORTHERN HARRIER and as it flew closer a few of the main identification characteristics of this nearctic race soon became apparent.  This bird had frustrated me now for well over a month so I was over the moon to finally see the bird well enough to judge it for myself.
In flight the solidly dark neck 'boa' was very noticeable as was its predominantly unstreaked rufous underparts.  The orangey colouration continued into the undertail coverts with similar warm tones also found in the wing coverts of this bird.  It really was unlike any juvenile Hen Harrier that I had ever seen before..... except perhaps for a similar bird that myself, Steve Dunn and Mike Feely found flying in off the sea during a storm at Spurn last August.  Click here for a discussion regarding our bird on Martin Garner's excellent Birding Frontiers website.
Anyway back to the Norfolk bird.  After quartering the marsh for a while the Circus hudsonius headed towards the mudflats where it dropped suddenly.  A few moments later it took flight grasping an item of prey, most probably a Dunlin.  It then returned to the ground where it spent the next forty minutes or so consuming its meal.  The harrier then treated us all to another quick aerial display before it headed inland after being mobbed briefly by a Barn Owl.  A superb end to another excellent day on the North Norfolk coast.
Posted by archiesbirding.blog at 21:22 1 comment: