As my regular viewers will know I had been counting down the hours since the news broke of Sir Paul Higson finding Britain's third SANDHILL CRANE on South Ronaldsay last Wednesday. I was physically exhausted after coming down with 'man flu' and mentally knackered after willing the bird to remain until I could get up to Orkney this weekend. The adventure started early on Friday evening and eventually came to an end during the early hours of Sunday morning. It goes a little something like this.....

I departed home in North Warwickshire at 6.00pm and arrived at the rendezvous in Mansfield, Nottinghamshire at circa 7.00pm (47 miles covered). Here the team made up of myself, Rich Vernon, Stevie Dunn and Mike Feely all held hands, formed a circle and chanted a secret prayer in preparation of our long journey northwards. Steady progress was made and a coffee break was held at Scotch Corner Services in North Yorkshire (157 miles covered) where a few other nervous looking birders were milling around biting their nails and pacing up and down. We then cut across country to Cumbria where we connected with the M6 and headed up through northern England and into Scotland. There were no hold-ups at the border crossing as all our necessary permits and paperwork were up-to-date. Heading up through the 'Land of the Picts' we enjoyed our second break at a closed Hamilton Services south of Glasgow, where a tank of expensive fuel was duly purchased (308 miles covered). 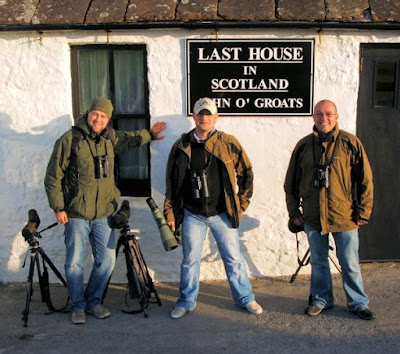 It was then onwards and upwards to Perth and onto the A9 passing through the 'real' Scotland as we went. There was a quick stop for a leg stretch and wow what a scene, the clear Highland, evening skies were full of a zillion, gleaming stars. The air was crisp and cool and the silence was perfect, just one of the many perks associated with long haul birding to such marvelous destinations. The next stop was the skiing resort of Aviemore where more fuel was taken on board (452 miles covered). We decided to make a swift exit as the local teenagers seemed restless. We had visions of them daubing blue make-up on their faces and charging the English invaders with a selection of farm tools grasped in their dirty hands, you know Braveheart style.

We had now reached the point where the adreneline had all but evaporated, all current birding topics and gossip had been discussed and all of us except the driver were dropping in and out of consciousness. Unfortunately I slipped into the 'Land of Nod' at completely the wrong time just as a suspected Scottish Wild Cat scarpered across the road near the hamlet of Evelix. As Chairman of the hastily incorporated BFRC - the British Feline Rarities Committee, it is very doubtful that I will be accepting this record - poor light, brief views, no photographic evidence and no field notes taken by the finder blah, blah, blah. We eventually rolled into the sun kissed car park at the famous village of John O'Groats just before 7.00am (601 miles covered).

So let the birding commence! Around the harbour a female Common Eider was bobbing about with good numbers of Shag and Northern Gannet passing offshore. Around the complex a pair of Hooded Crows were good to see along with numerous Rock Pipits, Meadow Pipits and Pied Wagtails. The surrounding fields contained good numbers of Eurasian Curlew, Northern Lapwing, European Golden Plover and Dunlin whilst shoreline waders included Common Redshank and Ruddy Turnstone. I then received a call from Paul Higson to say that the SANDHILL CRANE was still present.... superb, just the news we all wanted to hear. Just imagine if news had have been in the negative? I'm sure that a fair few of us would have jumped from the nearest headland in order to dash of broken hearts on the jagged rocks below. Unfortunately there was no sign of yesterday's YELLOW-BILLED CUCKOO and to make matters worse there was evidence to suggest that it's roosting site had been trampled by a few selfish idiots prior to sunrise.

Finally at 9.00am we set sail for Orkney. Bird species spotted during the 40 minute crossing included Red-throated Diver, Fulmar (35), Northern Gannet (500), Great Skua (8), Kittiwake (2), Arctic Tern, Atlantic Puffin, Razorbill (25) and Black Guillemot (2) as well as the usual Herring Gulls and Great Black-backed Gulls. Coincidently there were a number of American citizens onboard who were amazed at the amount of birders making the long trip to see just one bird. One particular chap from the State of Montana mentioned that before heading over to Scotland he had seen hundreds of SANDHILL CRANES migrating south over his house.

As the gang-plank was lowered the cew were assembled in prime position to make our next move. There at Burwick harbour awaiting us was Paul Higson's trusty Renault Clio, along with detailed maps on exactly where to find the bird as well as a luxury packed lunch specially prepared for four, burly, birders. This Orkney resident is a true birding legend with a heart of gold. With Steve navigating we headed the short distance across the island to the tiny hamlet of Windwick. We arrived at the site, jumped from the vehicle, grabbed our bins, scanned a distant stubble field and BANG there it was..... a magnificent adult SANDHILL CRANE feeding away, completely unconcerned about all the fuss it was causing. 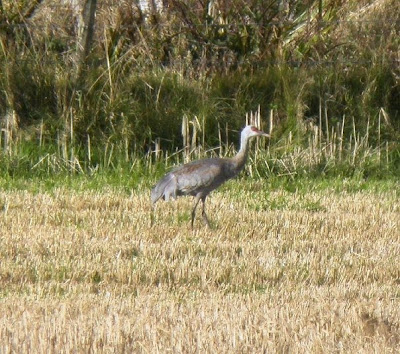 adult SANDHILL CRANE - Windwick, South Ronaldsay, Orkney - September 2009
It was a scene of smiles, relief and excitement as we all quietly absorbed the whole experience. A stunning species of bird all the way from North America, enjoyed in a wonderful location with the sun shining and small groups of Twite calling overhead. It just doesn't get much better. Other species in the area included a single Icelandic Greylag Goose, Pink-footed Goose (70), Northern Lapwing (35), Eurasian Curlew (10), Rock Dove (2), European Stonechat (male), Hooded Crow (4), Jackdaw (15) and Linnet (12). We savoured the two hours on Orkney to the maximum before deciding to catch the early ferry back to the Mainland..... OK there was potential to relocate the missing YELLOW-BILLED CUCKOO and admire a couple of AMERICAN GOLDEN PLOVER further north at Deerness but we all had our respective partners back in England who were eagerly awaiting our return. 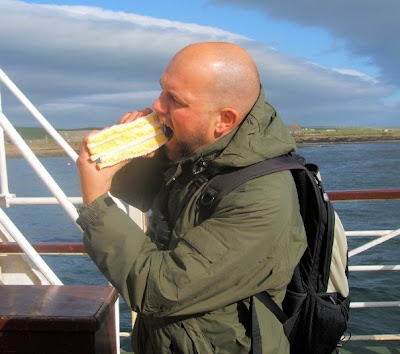 Archie tackles a 'Higson Big Egger Triple Decker'.
Thanks for the scram mate you're an absolute diamond! 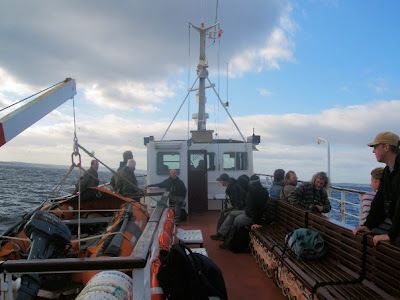 Heading back home onboard the Pentland Venture.... only 601 miles to go!
Upon arrival back at John O'Groats we were all absolutely shattered. We decided to tackle the journey home in a number of bite size steps with plenty of breaks. Our first one was just a few miles down the A9 as none of us could keep our little peepers open ...... despite the vast quantities of Red Bulland Pro-plus that were being downed and popped. As we disembarked the vehicle Common Ravens cronked overhead.... like vultures once did around wagon trails in those classic 'Wild West' movies. Maybe they could sense that we were all on our last legs and about to keel over at any time? 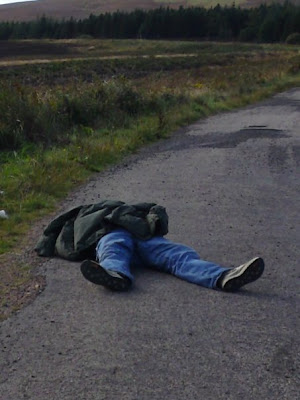 Oh yes I can sleep absolutely anywhere.... even an old stretch of the A9 in the Highlands of Scotland can quickly become an 'Archie Mattress'.
On the Black Isle north of Inverness we spotted a number of Red Kites before stopping off at a gloriously sunny Aviemore for a celebratory fish and chip supper. God, it tasted absolutely superb! We then continued our quest for England leaving the backdrop of the impressive Cairngorm mountain range behind us. As the sun dropped behind the horizon it became a real struggle to keep alert. It didn't help as we got caught up in some kind speed vacuum where distance travelled did not match our perceived mileage rate.... whatever that means.
Sunday 27th September 2009

Saturday slipped away as we neared Scotch Corner. We eventually arrived at Mike's home in Kirkby-in-Ashfield, Nottinghamshire at around 1.00am. I then jumped cars to make the final leg of the journey back to Warwickshire. A combination of 'Ricky Gervais Podcasts' and a few slaps around my own face ensured that I did not fall asleep at the wheel. Shortly before 2.00am I finally arrived home..... I had travelled a staggering 1,223 miles in around 32 hours, using three different cars and a single boat..... an endurance test I will not be repeating anytime soon.