A Day at the Natural History Museum in London 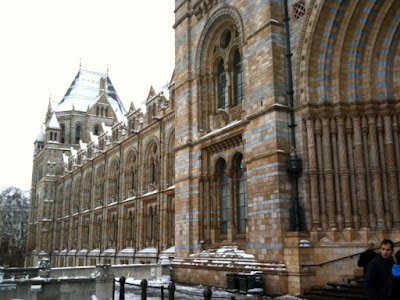 The snowy exterior of the Natural History Museum viewed from Cromwell Street.
I was due to head to London today to watch Manchester United play Chelsea.  Unfortunately though this pathetic Country of ours fails to function properly in adverse weather conditions and the biggest football match of the season was amazingly postponed.  I reckon the 'rent boys' just didn't fancy playing us right now bearing in mind their current atrocious form.  So with a return rail ticket to London already purchased I had to think of something else to do in the snow covered capital City.  Christmas shopping on Oxford Street was a definite no, so I opted for a day of culture and quiet contemplation in the salubrious surroundings of South Kensington and the Natural History Museum. 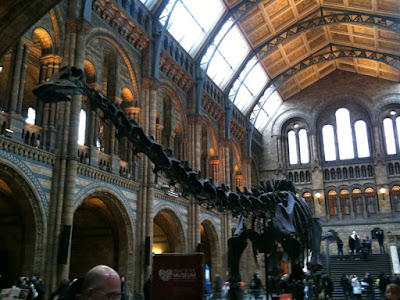 The Central Hall of the Natural History Museum complete with its cast of a fossilised Diplodocus skeleton.
It is not just the exhibits that have always enthralled me about this museum, it is also the amazing architecture that surrounds you.  I have a special interest in the fabric of this stunning building as the thousands of terracotta tiles and stone sculptures that adorn every nook were manufactured in my hometown of Tamworth between 1873 and 1880.  I like to think that one of the ancestral 'Archers' of yesteryear helped to handcraft some of the pieces depicting various flora and fauna of the World, some still with us but regrettably some now extinct.  The company, Gibbs & Canning Ltd closed in the 1950's. 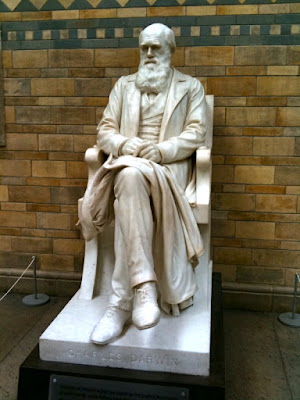 My homeboy Charles Darwin!
Obviously it is the birds that I'm most interested in so I made my way straight to that particular section of the museum.  It wasn't too long before I was admiring stuffed examples of the strange Shoebill of Eastern Africa and just opposite a daunting looking Harpy Eagle of Central and South America.  These are just two examples of those special species that I hope to see in the wild before I depart this World.
There are also some excellent examples of birds that I, or anyone else for that matter will never see again.    One of the highlights of these extinct species is the fossilised remains of a Moa species (see below).  It is thought that all eleven species of this giant resident of New Zealand died out after the islands were colonised by the Maori in the 17th Century.  Up until the arrival of man the only predator that these birds had to concern themselves with was the equally impressive Haast's Eagle, another species that became extinct around the same time. 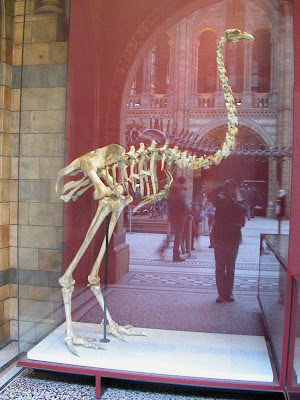 The Moa of New Zealand - my reflection in the glass tells you just how huge these birds were!
Premature extinction is not just confined to exotic, distant lands or restricted to ancient history.  A prime example of this is the relatively local Great Auk.  This flightless alcid was once abundant in the far North Atlantic where it had been hunted sustainably for over 100,000 years.  Unfortunately though, with the bird being relatively easy to hunt combined with the opening up of trade routes with North America the species was over exploited.  It was used readily for food and oil but the European populations suffered mostly due to the huge demand for down filled pillows and mattresses.  The nearest breeding colonies that existed were as close as Papa Westray on the Orkney Isles and on the remote Scottish island of St Kilda.  It is from this island that the last British sighting was made.  In July 1840 a trio of local men caught a Great Auk and kept it tied up for three days until a wild storm swept in.  Believing that the bird was a witch and had caused the sudden change in the weather, they then beat the unfortunate bird to death with sticks! 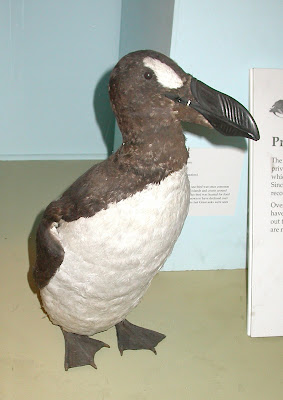 Great Auk - an example of one of only eighty complete specimens left in the whole World.
The egg below belongs to the extinct, flightless Elephant Bird of Madagascar.  This species was slightly smaller in height than its ratite cousins of New Zealand but still stood at an impressive three metres tall.  Its body weight however was thought to be a third more than that of the Moa.  They are believed to have become extinct during the middle of the 17th century, again due to over hunting.  There are only 36 complete eggs of the Elephant Bird in existence.  Amazingly the size of the egg is larger than any of the dinosaur eggs ever found and has the equivalent volume of 160 chicken eggs. 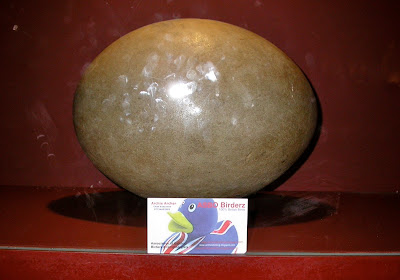 The impressive egg of the Elephant Bird, imagine what a great omelette it would make.
So with the birds all but done it was then time to take in the other areas of the museum.  There is something for everyone, of all ages and it was great to see some of the looks of wonder on the faces of those that were visiting for the first time, especially the kids.  The dinosaur section is pretty amazing as is the 'Our Place In Evolution' display.  One of my favourites however is simply the cross section of the Giant Sequoia tree that stands at the top of the Central Hall.  This five metre slice of history was once part of a 1,300 year old coniferous tree that lived in the old growth forests of central California until it was felled in 1893.  It's crazy to think that this mighty tree may have continued growing for another 1,000 years and was a seedling in the year 557.

Entry to the museum is completely free of charge, so for the price a pre-booked £30.00 train ticket you can enjoy some of the natural wonders this planet has to offer all under one roof.  I'd recommend a visit just as soon as you can..... but please leave a generous donation. 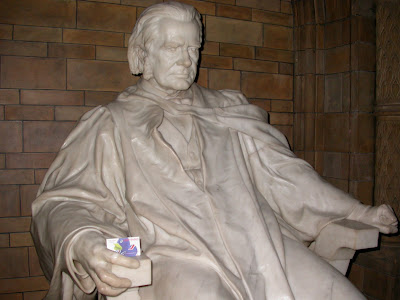 My main man Thomas Huxley shows his support for the ASBO theory of birder revolution!
Thomas Huxley was one of the first people to support Charles Darwin and his theory on human evolution despite the ridicule he would have to endure.  During a heated discussion at Oxford University with the sceptical Samuel Wilberforce in 1860 he was asked whether he had descended from an ape on his mother's or father's side of the family.  Huxley quickly responded that he would sooner be descended from an ape than from a man who mis-used his great talents in order to suppress debate.  This is one of the greatest come-back lines in history.
Posted by archiesbirding.blog at 18:30 3 comments: 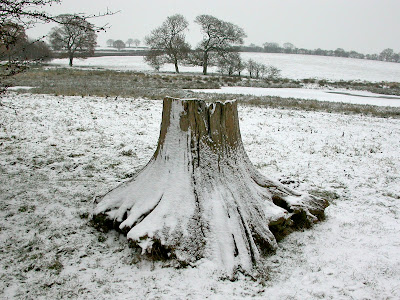 There was not a great deal to report from the patch today amongst the Arctic weather conditions.  On Mill Pool there were 12 Common Shelduck, 10 Goosander, 55 Eurasian Wigeon and 8 Northern Shoveler.  A flock of Northern Lapwing roosted on the ice and an adult Yellow-legged Gull dropped in briefly.  The escaped drake Hooded Merganser was still on the River Anker just north of Shuttington Bridge. 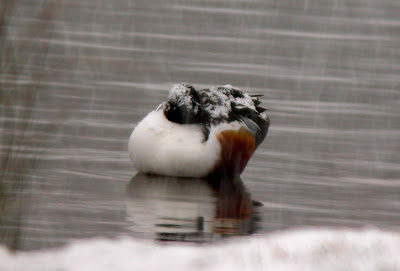 Just what you need at the moment...... a snow shoveler!
Posted by archiesbirding.blog at 16:21 1 comment:

AMERICAN WIGEON in Rutland... or is it Leicestershire? 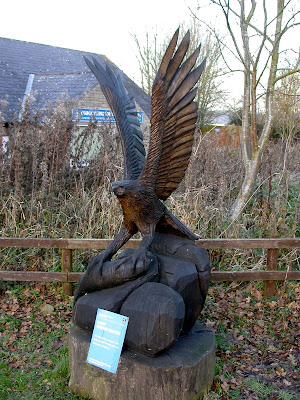 I attempted to 'half inch' this impressive sculpture for my nan's Christmas present but I failed to squeeze it in the back of the old Skoda.
With the chance to add to the year-listing insurance policy, I took the opportunity to head over to Rutland Water today.  The reason being, I woke up in a cold sweat the other night in a blind panic.  I had dreamt that just before midnight on New Year's Eve the BOU announced that the pesky redpoll complex had been re-lumped and I ended the year on 299!
It was the first time I had visited the Lyndon part on the reservoir and I was surprised just how quiet it was.  Maybe it was because visitor centre was closed or perhaps it was due to the icy access road only just being re-opened.  Whatever the reason I was loving it, peace and quiet on a sunny and tranquil winter's afternoon.  There's always something to spoil it though.  Upon entering the Teal Hide I was faced with a couple of the usual manic-depressive birders, you know the ones.  They are the type that never respond to your polite 'Hello', they avoid eye contact at all costs, they communicate amongst themselves in a series of quiet grunts, they rarely break into a smile and they give the impression they would rather be anywhere else other than out birdin'.
Anyway I stuck to my year long rule of not asking them if the target species was showing, I wanted to find it myself.  To be honest though judging by the expressions on their sour faces I don't even reckon they'd spotted it.  So after grilling the various wildfowl for a while I eventually picked out a handsome drake AMERICAN WIGEON (301).  The bird eventually showed well close in shore just to the west of the visitor centre amongst its Eurasian Wigeon cousins.  Other web-footed treats included 7 Smew (2 adult males, a first-winter male and 4 sexy females) as well as 3 Greater Scaup (adult male & 2 females) and a single female Goosander.  Other species of note included 2 Black-tailed Godwits and a Water Pipit. 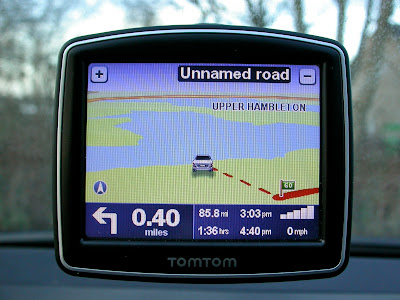 A Tom Tom eye view of Rutland Water!
Posted by archiesbirding.blog at 20:19 No comments:

Check this shit out, it's the work of a genius....... and before anyone spreads any rumours, I had nothing to do with it...... whoever it is though should be nominated for a 'Golden Globe' or summut!  Don't forget to keep watching it to the end for footage of two of Britain (& Ireland's) most infamous bird-spotters making some serious shapes on the darrrrnce floor of the Porthcressa Disco!

Posted by archiesbirding.blog at 19:13 No comments: 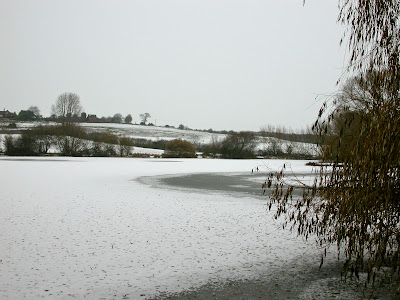 A thawing out Gilman's Pool at Alvecote Pools SSSI - December 2010
A small flock of Pink-footed Geese were found by Roy Smith amongst the Canada Geese earlier on the week.  After last night's heavy snowfall though, I was worried that there might not be enough exposed 'fieldage' available for them to feed on and that they might move on.  Only the odd single Pink-footed Goose of dubious origin has ever lingered at the patch so I was praying that they would stay put until the weekend.

After pulling up onto a snowy Dingle Hill this morning I soon picked up the Canada Goose flock and not long after that I had also picked out the first of six 6 Pink-footed Geese in the distance.  Tom 'Dom Jolly' Perrins then appeared briefly before it got too cold for him and he fled to the comfort of his cosy car.  For the more hardcore amongst us though it was time to use our stalking skills and creep close enough for a few record shots..... and here they are..... 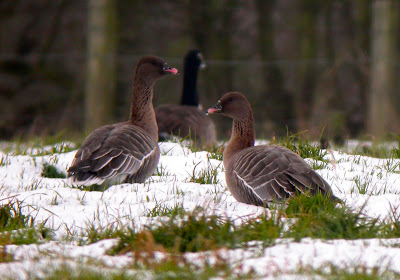 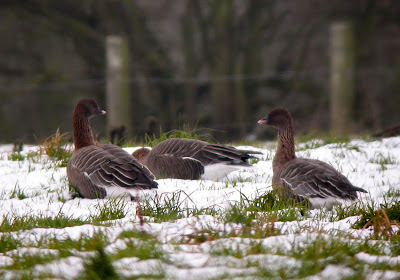 In the same field I also stumbled across a small covey of 4 Grey Partridge, a species that is unfortunately now very scarce in the area.  There were also good numbers of Fieldfare around and a single Brambling passed overhead.

Down on a mostly frozen Mill Pool the Common Shelduck flock had increased to 13 birds and there were also 6 Goosander.  Around Gilman's Pool there was a Willow Tit and a Goldcrest amongst the mobile mixed Tit flock.

By the way, no geese were harmed (or fushed) during the making of the above photographic evidence.
Posted by archiesbirding.blog at 12:53 No comments: