News emerged earlier this week regarding a male SPANISH SPARROW that had been resident in Calshot, Hampshire for over a year!  There were even rumours that there were one or two House Sparrow x Spanish Sparrow hybrids at large in the same location. Although not one of the most impressive rarities to grace the British List this is a species that I had never connected with in Britain and so I needed to move for it as soon as possible.

As I approached the small village of Calshot on England's beautiful south coast, it was difficult to believe it was the middle of January. Not only was the sun shining bright it was also remarkably mild, just how winter birding should be. To make matters even better the handsome SPANISH SPARROW sat chirping away in a roadside hedge as soon as strolled up on site.  This was way too easy. After a few minutes the bird was eventually disturbed and off it flew with the rest of the sparrow flock.  With a break in proceedings I decided to desert the crowds and check out the rest of the village.

Down on the beach, a quick scan of The Solent produced nothing of note between the mainland and the Isle of Wight except for a single Great Crested Grebe and a few Cormorant.  A leisurely stroll along the shingle turned up just a few Goldcrest amongst the shoreside vegetation.  With most 'tick and run merchants' having departed for an alternative rarity fix, I then headed back up to Calshot Close for some extra views of the local celebrity.  After a short wait the rare visitor from southern Europe performed well for nearly twenty minutes as it hopped around a sun-drenched hedge.  Very satisfactory indeed.

I then dropped in at the New Forest on the way back home. Both Dartford Warbler and Firecrest eluded me during my short visit however a did see a couple of Red Admiral butterflies fluttering around the heathland as if it was May.


The SPANISH SPARROW in Great Britain

The nominate race hispaniolensis breeds from the Atlantic Islands east across North Africa, Iberia, Corsica, Sardinia and from the Balkans and Romania down to Israel. The race transcapicus can be found from Iran eastwards to Kazakhstan and Afghanistan. This eastern population are mostly migratory and winter from Egypt down to the India subcontinent whilst those in the west are largely sedentary. It is unknown from where the British records may originate however hispaniolensis is surely the most likely candidate.

If accepted this latest sighting is only the eighth record for Britain.  The previous seven records are as follows:

Posted by archiesbirding.blog at 20:30 No comments:

With just one previous sighting of a DARK-EYED JUNCO in Britain I decided to head south with my East Midland comrades for a good look at another one. My first was in the sun drenched back garden of a lovely couple in Langham, Norfolk during July 2007 so to see one in more natural surroundings would be a real bonus.

After a leisurely Sunday morning drive through some of Hampshire's most picturesque villages we reached a busy car park at Hawkhill Inclosure at around 9.00am.  As we made our way towards the assembled birders the forest was alive with the distinctive sound of calling Common Crossbills flying overhead.  With the American rarity only showing very briefly earlier in the morning we set up our scopes and staked out the edge of a clear fell area in the hope of gaining a glimpse of the bird ourselves.

Our chances of success were increased by some kind locals who had scattered seed over a fallen pine tree. This meant that the skulking sparrow could be lured out to feed in full view as long as birders behaved and kept their distance.  After a while of seeing nothing other than Chaffinches and Reed Buntings we received our first tantalising glimpse of the DARK-EYED JUNCO.  After a further patient wait the handsome first winter male appeared out in the open.


The bird then continued to show well on and off in it's favoured area albeit for short periods of time.  It would also fly over our heads every now and then in order to consort with the Chaffinches in the canopy of the pines nearby.  An estimated 24 Common Crossbills also remained faithful to the locality some of which showed exceptionally well at times.  Other species included Great Spotted Woodpecker, 3 Coal Tits and 6 Siskin.


We then decided to search elsewhere to pick up a few 'year birds'. Whilst driving back through Beaulieu a Little Egret was spotted feeding.  Around Beaulieu Road Station we were lucky to pick up a couple of singing male Woodlark, one of which showed well scratching around the sandy soil of the heathland habitat. Other birds in the area included a fine male Stonechat, a Goldcrest, a Treecreeper and several Meadow Pipit.  Unfortunately we failed to locate any Dartford Warbler in the area.

It was then time to head west over to Dorset in order to try for yet another rarity but this time it was a species from way east as opposed to one from North America.

The DARK-EYED JUNCO in Great Britain


This species breeds in North America from the tree line of northern Alaska and Canada, south to southern California, northern Texas and northern Georgia.  All occurrences in Britain have been of the form hyemalis, previously separated as Slate-coloured Junco. This race breeds from northern Alaska east to Newfoundland and south to south-central Alaska, north-east British Columbia and from central Alberta east to northern Pennsylvania, south-east New York and southern New England

With the sun shining brightly and a slight chill in the wind it was a perfect day for a stroll around Cannock Chase. The first stop was Upper Longdon where a Great Grey Shrike had set up a winter territory in an area of clear fell. Near the roadside a couple of Brambling were spotted feeding among the beechmast with a small flock of Chaffinch.  We then took the path down to the valley and within a few minutes were enjoying stunning views of the handsome Lanius perched atop the sparsely distributed rotting tree trunks. 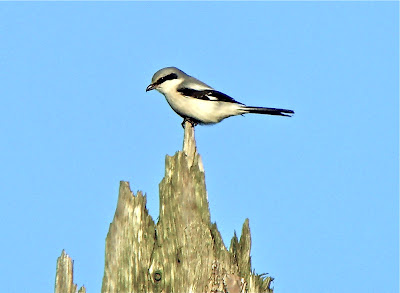 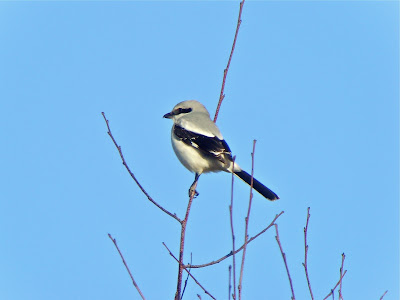 With a bit of patience the bird showed right next to the paths that skirt the perimeter of its favoured feeding area so trudging aimlessly around the clear fell area seemed pretty pointless.  Unfortunately a few birders and photographers did not seem to share my point of view though.  The highlight of the afternoon was when it spotted a potential item of prey and took advantage of the breezy conditions by hovering above it for around fifteen seconds in the style of a small, monochrome Kestrel.  The only other species of note was a single Raven passing through, my 100th species of 2012.

We then drove across to the other side of the Chase to Freda's Grave. At this popular site we picked up a few more year ticks including a couple of Willow Tit and a pair of Bullfinch around the feeding station.  There were also good numbers of Coal Tit and Nuthatch showing well amongst the usual woodland species just inches away from the bumper of the parked cars. A quick walk down into Sherbrook Valley produced a Green Woodpecker and the odd Reed Bunting or two, once again new species for the new year.


On the way back home we decided to brave the plummeting temperatures and the biting wind chill factor by calling into Chasewater for the gull roost.  After picking out a couple of adult Yellow-legged Gulls it was Snapper Richards that came to the rescue by locating the third winter Iceland Gull just before hypothermia set in.

All in all it was a pretty enjoyable start to 2012 bird wise but alas all good things must come to an end.... it's back to work for me tomorrow.
Posted by archiesbirding.blog at 22:52 3 comments:

Oh well, it's 2012 and as we packed up the car for our trip east the first species hit the year list as one of our resident Little Owls called out near The Cottage.  The second species added were a couple of grotty looking street lit Rock Doves..... well feral pigeons as we passed through a spookily quiet Leicester City centre. The third addition was way more beautiful as the spectral form of a Barn Owl flailed across the A47 just before Uppingham.  As we entered Norfolk a few corvid species and winter thrushes were also picked up under the first sunrise of the new year.

We made the mistake of making yet another unsuccessful diversion around Wolferton for dodgy hybrid pheasants but with more curb-crawling weirdos around than the red-light district of Amsterdam we did one almost immediately.  I toyed with the idea of calling in at Sandringham to drop off a 'Get Well Soon' card for Prince Philip but as a staunch Republican I thought it would be a little hypocritical. We eventually pulled into the car park at Titchwell RSPB and a few more common species were wrapped up including an obliging female Great Spotted Woodpecker.  Around the visitor centre a mixed flock of various Redpoll and Goldfinch were located high up in the alders but it was not until they dropped down to a lower elevation that we could start grilling them properly.  Eventually the paler and slightly bulkier form of a first winter COUES'S ARCTIC REDPOLL was located amongst the 15 dowdier looking Lesser Redpoll.  There was also at least one Mealy Redpoll with the group as they commuted between the picnic area and the visitor centre.

Other highlights around the reserve were European White-fronted Goose (2), Egyptian Goose (2), Pintail (male), Little Egret, Marsh Harrier (2), Avocet, European Golden Plover (800), Spotted Redshank (3), Common Snipe (3), Black-tailed Godwit (8), Ruff (12) and a single Dunlin amongst the usually encountered species.  Feeding along the beach there were Grey Plover (3), Bar-tailed Godwit (2), Knot (3), Sanderling (34) and Turnstone (16) whilst out on the sea we managed to pick out European Goldeneye (7), Red-breasted Merganser (2 males), Red-throated Diver (2), Great Crested Grebe (5) and Slavonian Grebe.  On the way back to the visitor centre for a civilised lunch, the unusually tame Water Rail performed well for the aviarazzi in a ditch just a few feet from the public footpath.

After a period of fine dining we bid farewell to Mike Feely and his Nottinghamshire crew. They were off to Cley for some rarity action whilst we decided to concentrate on quantity rather than quality.  It was New Year's Day and we needed to beat him in the numbers game.

Our next stop was the Choseley area where we added various farmland birds to our day list including Grey Partridge (3), Red-legged Partridge (10), Stock Dove (4) and Yellowhammer (12). We then drove the short distance to Holkham Hall where we were lucky to flush a Woodcock from the leaf litter and pick up some much needed woodland specialities such as Treecreeper (4), Nuthatch (2) and Marsh Tit.

We finished the day back at Titchwell RSPB and as dusk descended upon us we enjoyed the spectacle of ten Marsh Harriers in their pre-roost display as well as a calling Cetti's Warbler.  We finished the day with a pretty impressive 95 species, not bad considering our late start and relaxed approach. Oh and Feely and company finished with 87 species..... West Midlands 1 East Midlands 0.

Posted by archiesbirding.blog at 20:30 No comments: