After missing out on this bovine stalking species on two separate occasions so far this year, it was a stroke of birding luck that a CATTLE EGRET should turn up in my neighbouring County earlier this week. So after a gruelling day at work I raced north up the M6 to Stafford where hopefully I'd connect with an easy localised 'year tick'. As I arrived at Doxey Marshes SWT there was no sign of the bird and even the herd of prime British beef were proving to be rather elusive amongst the rank vegetation. I was beginning to think that the only chance of connecting with this bird would be to 'steak' out the area and wait patiently for it to fly into 'roast' like it had on the two previous evenings.
I was was just beginning to slip into a dip induced a coma when I received a text from my year-listing comrade Stevie Dunn. The bird had reappeared and was now viewable from the track near the main car park on the 'udder' side of the reserve. He deserved a huge 'pat' on the back for letting me know so quickly. 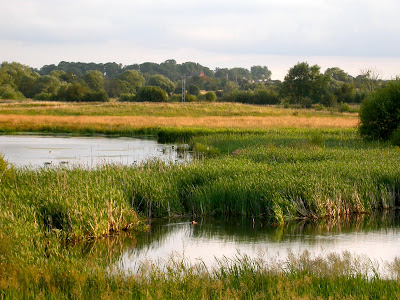 Doxey Marshes Staffordshire Wildlife Trust Reserve
The small white dot near the centre is actually the CATTLE EGRET roosting in a small willow.
As I arrived in position the bird had finished feeding amongst a small herd and had 'mooooooved' to a small clump of vegetation on the edge of a pool. It was here that the juvenile CATTLE EGRET (251) continued to show, although obscured throughout the period I was on site. The bird then flew off to 'roast' in its favoured area at around 8.40pm where it remained until dusk. 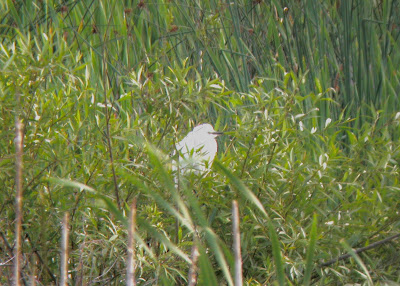