From RIVER WARBER to WHITE-TAILED PLOVER... whilst tipsy! 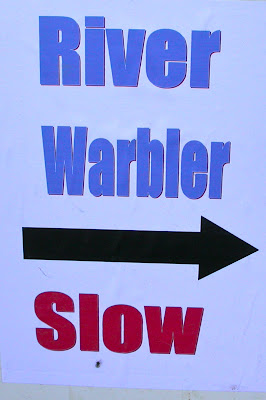 The mammoth trip started at midnight when Pezza Perrins

& Jules Allen picked me up from home in a rather inebriated state. Suffering back and knee pain that evening and with the drugs starting to wear off, I thought it would be a good idea to knock back a few pints of Guinness and wash it down with a cheap bottle of Morrison’s Scotch. It helped with the aches and also worked a trick with handling the long drive to east Norfolk. During the journey we were all also entertained (via the medium of mobile telephone) by an equally intoxicated representative of a major environmental organisation. Her target was to recruit Jules & Pezza as new members but not even the promise of a signed photo could convince the tight bleeders to part with £36.00 per annum.

After a few stops en route we eventually reached the private site at 4.45am and pulled up into a safe spot nearby. The song of Cetti’s Warblers and

Turtle Doves could be heard complimenting the early morning sunshine and the early hirundines. It is quite amazing how such simple nature based stuff can sober me up within seconds.

At 5.00am dead we made our way around to the viewpoint and I immediately heard the distinctive ‘sewing machine’ reeling of a male RIVER WARBLER as I staggered from the vehicle. It was not too long before around 20 of us were watching the bird perched up, belting out its looped repertoire much to the delight of the yawning, bleary eyed ensemble of birders. 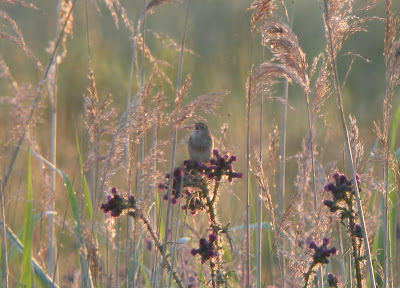 singing male RIVER WARBLER - Thorpe-next-Haddiscoe, Norfolk
After showing well for the next twenty minutes or so the bird then became much more elusive until we left the site at around 7.15am. Occasional glimpses of the rarity in flight and of it obscured as it preened and sang amongst a clump of young alders was about the best it got. We therefore decided to head for some scram in the form of my first ever Little Chef veggie breakfast. Nice introduction Pezza.
It was good to see some familiar faces on site like the East Midlands chapter of ASBO, along with my old twitching step-dad John Scullard and the dedicated Devonshire Crew. I am glad you connected on your second attempt lads!
Special shout outs to the kind landowner for allowing a bunch of saddo' twitchers to take over his plot of land for a while. Much respect also to Sir Dick of Filbyshire and his band of merry men (and women) for doing a superb job stewarding the area. We are all most grateful for you all getting up so early in order to keep us all in order. In total over a £1,000.00 was raised for both the Norfolk Wildlife Trust and the British Birdwatching Fair project of choice for 2010.
Posted by archiesbirding.blog at 22:20