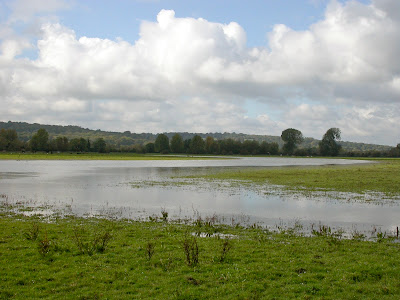 Port Meadow Floods, Oxford - looking south towards the River Thames.
After a rare lie in this morning, I headed the relatively short distance over into a neighbouring County for a new year tick.  Thanks to some excellent directions I managed to find the spot without any problems at all.  Port Meadow is situated on the outskirts of the historic city of Oxford and is adjacent to the famous River Thames.  Before today I knew absolutely nothing about this area but I since found out some interesting information.  The meadows are an ancient area of grazing land, still used for horses and cattle, and has never been ploughed. In return for helping to defend Britain against the marauding Danes, the Freemen of Oxford were given the 300 acres of pasture by Alfred the Great who founded the City in the 10th Century. The Freemen's collective right to graze their animals free of charge is recorded in the Domesday Book of 1086 and has been exercised ever since.
Upon arrival, the sights and sounds of circa 600 Eurasian Wigeon, 29 European Golden Plover and a scattering of Northern Lapwing were enjoyed amongst the odd passing train, the grazing bovines and the posh joggerettes.  Soon enough I was watching a trio of waders consisting of an adult Ruff, a Common Redshank and a juvenile LESSER YELLOWLEGS (291), the reason for the trip.  The American vagrant showed well if not a little too distantly for a decent photo during the time I was there.  It was disturbed occasionally by a pair of Carrion Crows but would always return back to its favoured feeding area along the northern section of the floods. 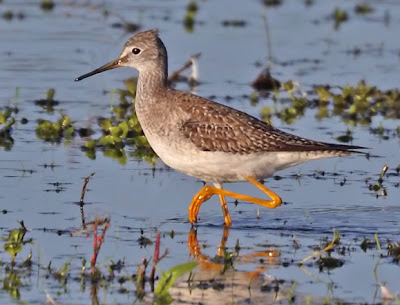 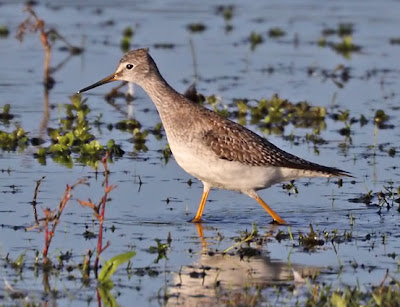