The weather was pretty awful as we awoke from our slumber in Penzance.  It is always tempting to just stay in bed during those wet and windy Cornish mornings but to be honest I can never resist the lure of those nearby coastal valleys.  The first stop was Nanquidno where almost immediately I heard the distinctive call of a Yellow-browed Warbler.  Unfortunately though, it was nowhere to be seen in the blustery conditions.  After a thorough check of the plantation near the ford we decided to head further down into the valley where a few Goldcrests and the odd Chiffchaff was spotted.  Near Nanjulian a slightly different regulus call was heard and a few seconds later a stunning Firecrest appeared.  The bird was pretty elusive but showed well at times, especially when it perched up in a small Monkey Puzzle tree briefly.  Upon our return to the car the Yellow-browed Warbler (294) was heard again near the plantation. Eventually I managed to catch a brief glimpse of the elusive pest in one of the nearby gardens. 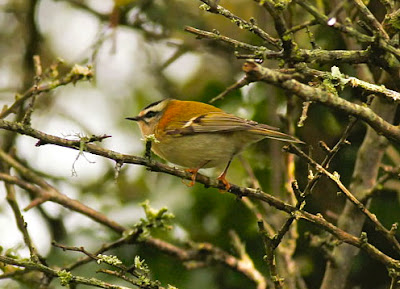 Firecrest - Nanquidno, Cornwall - October 2010
Photo loaned from Cornwall Birding
With the weather deteriorating we then headed down to Sennen Cove for a quick brew and a stroll up to Mayon Cliff overlooking a windswept Land's End.  Gannets and Kittiwakes passed by offshore as well as the usual selection of Herring Gulls, Great Black-backed Gulls, Shags, Cormorants and Rock Pipits but nothing more interesting was picked up. 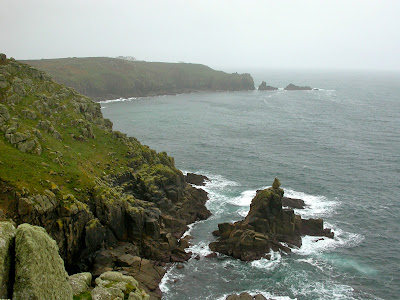 Land's End viewed from the old coastal watchpoint at Mayon Cliff.
With time running out it was then time to make the long, depressing journey back to the Midlands.  A quick stop at the Hayle Estuary produced a sleepy Eurasian Spoonbill, a few Little Egrets and an adult Mediterranean Gull amongst the usual species.
Once again my favourite County in Britain provided us with a few cracking birds, a whole load of stunning scenery, many great laughs and some precious memories.  I need to live down here as soon as possible, it is where I belong.
Posted by archiesbirding.blog at 11:56