It's official, year-listing drives you mental! BAIRD'S SANDPIPER in Essex 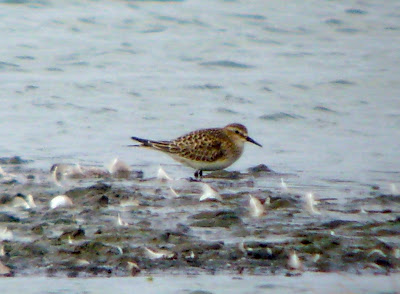 BAIRD'S SANDPIPER (juvenile) - Holland Haven Country Park, Essex.
Photo kindly provided by Matthew Deans
Whilst enjoying some hot Laridae action near Southend-on-Sea, news filtered through of a probable BAIRD'S SANDPIPER over at Holland Haven Country Park.  There was no way we were going to bother contemplating a visit until confirmation of yet another American rarity was received though.  Whilst nearing the M25 and making slight in roads into getting home at a reasonable time, the sighting was confirmed.  We turned around and made our way over to Clacton-on-Sea as the daylight began to fade.  Upon arrival we sprinted down towards the pool and entered the fire-proof bird hide, cunningly fashioned out of a couple of old shipping containers.

Luckily, the birding Gods were smiling down on us.  There was a trio of extremely helpful Essex birders already watching the bird and they were happy to let us use their scopes of the light quickly deteriorated.  The vagrant showed well as it picked its way around the Northern Lapwing flock until it was too dark to see anymore.  We had arrived in the nick of time to see our FOURTH American rarity of the day.  It was also yet another addition to my year list..... or was it?
Whilst updating my 'BUBO Listing' tally, I frowned as it failed to let me input BAIRD'S SANDPIPER as a new sighting to my '2010 British Year List'.  Maybe there was a bug with their server or maybe I had already added the species in error?  I then realised I had already seen an adult bird up at Lound in Nottinghamshire during August!
It is therefore official, this year-listing nonsense f*cks up your mind completely!  How could I forget such a memorable species?  I fear that I shall soon be sectioned under the Mental Health Act 2007.  I will see you all after I have undergone an extensive course of electroconvulsive therapy.
Posted by archiesbirding.blog at 22:00