After an early start from Warwickshire we finally hit a sun-drenched Cornwall during late morning.  The first stop was the Hayle Estuary where I had hoped to add Whooper Swan to my 'Kernow List'.  Unfortunately yesterday's small, family party could not be located but a juvenile Curlew Sandpiper was nice to see showing well near the causeway bridge.  Other species included 6 Common Shelduck, 475 Eurasian Wigeon, 120 Common Teal, 4 Little Egrets, 20 Oystercatcher, 6 Bar-tailed Godwits, 15 Eurasian Curlew, 18 Common Redshank and 6 Dunlin. 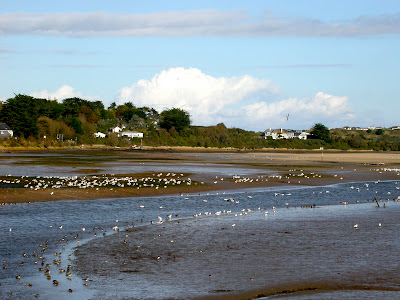 Hayle Estuary, Cornwall - October 2010
After grabbing a tasty vegetable pasty at the bakery in Marazion we took advantage of the low tide by taking a leisurely stroll along the cobbled causeway to St Michael's Mount and out over the sandy beach of Mount's Bay.  Due to the presence of the dog-walking fraternity not a great deal of birds were spotted other than the usual Cormorant, Shag, Herring Gull and Oystercatcher.  It was then over the road to Marazion Marsh RSPB where a Bittern had been spotted earlier on in the morning.  It failed to appear whilst we were there though and the only species of note was a single male Common Stonechat and the odd singing Cetti's Warbler.  A quick visit to the ancient fishing hamlet of Mousehole produced 9 Ruddy Turnstone around the harbour and the odd Goldcrest around the back of the village but nothing else of note.  Despite being in one of my favourite places on the planet during a most gorgeous spell of autumn weather, the birding was not really matching the occasion.  It was time to move it up a gear.
After a short drive west towards Land's End, we parked up just east of Sennen near the entrance to Trevedra Farm and took the short farm track south.  Taking care not to spook the flock of 120 European Golden Plover and the odd Northern Lapwing, I carefully set up the scope and began to scan the nervous group.  On the first scan through nothing unusual could be located but upon the second a delicate juvenile BUFF-BREASTED SANDPIPER (292) strolled into view before quickly disappearing over the brow of the hill.  As more birders arrived on site, the flock was flushed by a marauding Common Kestrel.  As the pack swirled around in the early evening skies I eventually picked out the much smaller American vagrant.  Luckily a short while later, the flock settled back down in the same field and this time the BUFF-BREASTED SANDPIPER showed well until we left. 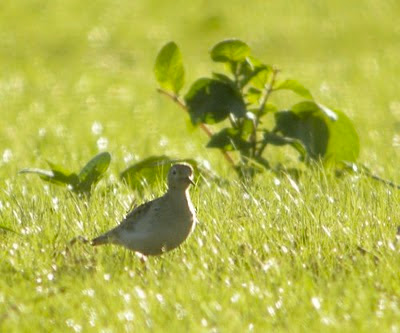 BUFF-BREASTED SANDPIPER (juvenile) - Sennen, Cornwall.
Photo by Adam Hartley of 'Pendeen Birding'
Buff-breasted Sandpiper fact file
After receiving a tip-off from Cheshire birding pal, Mal Curtin at Trevedra Farm we then headed the short distance north to Nanquidno Valley.  He had seen a very vocal Yellow-browed Warbler down there earlier on in the day and as it was a species I needed for the year, I decided to give it a quick bash before the day ended.  Despite a thorough search of the area the bird could not be located amongst the many Goldcrests in the area.  Before making our way back towards Penzance to find our accommodation we popped in at Pendeen to watch the sun go down.  A LITTLE SHEARWATER had passed by this very spot the day before but even that special seabird would fail to equal the beauty of a typical Cornish sunset. 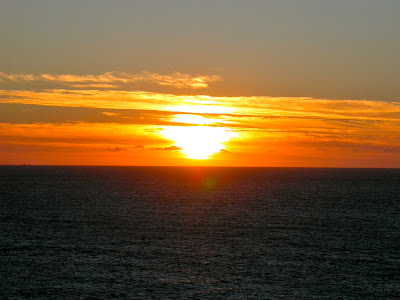 Sunset at Pendeen - the slight peak on the horizon to the left of the photo are the distant Isles of Scilly.
Posted by archiesbirding.blog at 18:34