After a busy day at work attempting to boost Britain's faltering economy, I received a Tame Valley text alert from Tom Perrins. Dedicated Warwickshire birder, Bob Duckhouse had found a LEACH'S PETREL just a ten minute car journey from where I live. Decent numbers of this species have been passing the north-west coasts of England, Wales and Scotland over the past few days so it was inevitable that one would turn up in an inland location eventually. Fortunately for me this particular individual decided to choose the furthest point away from the ocean in Britain that it could.... but could I get away from work in time?
After lengthy negotiations with my stubborn Yorkshireman of a boss, he eventually released me from my duties at 3.00pm. At this stage there had been no sign of the diminutive seabird for over half an hour. Just twenty minutes later I arrived at Coton Lakes and was told that the wrecked waif had just been relocated. Amazingly it had been found loafing amongst some willows at the edge of the lake. Just as I got into a decent viewing position the bird emerged from the vegetation, a magnificent LEACH'S PETREL (276) gliding around a balancing lake in deepest North Warwickshire, an amazing sight indeed. After a few minutes the bird gained height suddenly and disappeared high over the trees in a east north easterly direction, never to be seen again. I had arrived in the nick of time. 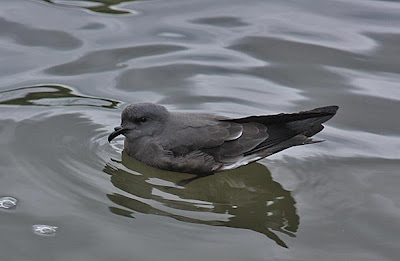 Leach's Petrel - Coton Lakes, Warwickshire - 15th September 2010
Photo by Bob Duckhouse
Read Bob's 'finders account' and see some extra photos HERE
LEACH'S PETREL in Warwickshire
To see this species in my home County is a real treat. It is not quite as rare in Warwickshire as you would imagine though. A major wreck of LEACH'S PETRELS occurred during 1952. Due to violent storms around the western coasts of Britain on the 25th and 26th October, hundreds of birds were forced inland with at least 56 birds being located in the West Midland recording area alone. There was another much smaller influx involving five birds during December 1989 but only one of these oceanic waifs graced Warwickshire. The latest wreck came during December 2006 when four birds turned up in Warwickshire in a two day period from the 7th and 8th December. An additional seven birds turned up elsewhere in the West Midlands area during this time. Unusual occurrences included a bird roaming around Tescos car park in Redditch, Worcestershire on the 8th December and another found recently dead inside the porch of a house in Bournville, Birmingham on the 7th December.
Since 1980 we have been fortunate enough to receive the following records for Warwickshire:
Posted by archiesbirding.blog at 17:40