I was all set for a relaxing spot of birding around the neglected local patch this morning. This was to be followed up by watching my beloved Lambs at home to Grimsby Town. These plans were scuppered however upon hearing the disconcerting news that a sneaky, year-listing rival had ventured east to add a few more species to his 2010 list. I phoned Stevie Dunn to see what he was up to and after a bit of wavering back and forth we decided to belt it over to Norfolk too. There was no way that Mikipedia Feely was going to catch up with us. 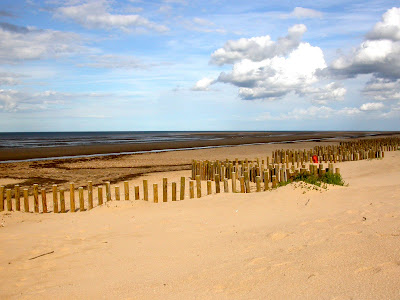 The beautiful beach at Holme NWT, Norfolk - September 2010.
We arrived at Holme NWT sometime during early afternoon to find a surprising amount of birders staking out the pines near the sea-watching hide. Luckily, within minutes I caught a glimpse of an elusive ARCTIC WARBLER (273) thanks to directions provided by Mark Payne & Dan Pointon. We then spent the next hour or so catching the odd glimpse of the bird as it quickly hopped from from tree to tree. Also on site were a couple of far more showy Spotted Flycatchers. 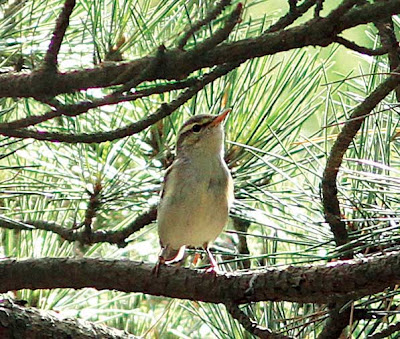 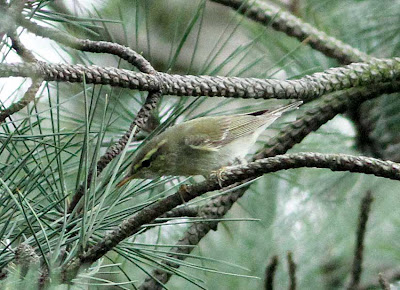 Whilst heading over to Norfolk news came through of a WESTERN BONELLI'S WARBLER in East Yorkshire. There was no way that we'd make it up there today but we were already busy planning a trip for the following day. This year-listing nonsense was beginning to get me down again. I doubted whether I'd be able to stand the pace of a stressful British, birding autumn.
ARCTIC WARBLER in Norfolk
After a bit of geeky research I discovered that this species is not as regular in Norfolk as you might imagine. The first record for the County and also for Britain was on the 4th September 1922 when a bird was shot on Blakeney Point by the infamous E.C. Arnold. At this time the species was known as Eversmann's Warbler. The corpse of this unfortunate individual can still be found on display at the Castle Museum in Norwich. If accepted this latest bird will be just the 16th ever record for Norfolk. 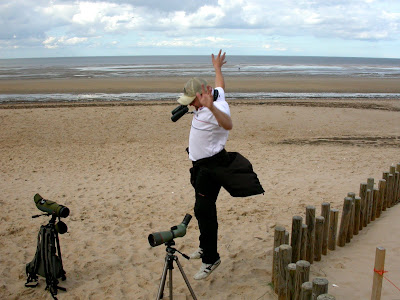 Stevie Dunn jumps for joy (reminiscent of Alan Carr at an all night rave) upon clinching Arctic Warbler for his British List.
Posted by archiesbirding.blog at 19:51