With news of a GLOSSY IBIS (278) reaching Somerset I knew that I had to take action in order to finally add the species to my 2010 List. Maybe one would stray closer to the West Midlands or then again perhaps it would not. I decided not to take any chances and to embark on a quick blast down to the depressing, hell hole that is Avonmouth near Bristol. Any feelings of despair regarding the surroundings were soon banished though as I caught my first glimpse of this scarce visitor from southern Europe. It was completely unconcerned about me admiring it from just a few feet away as it busily fed in a ditch on the edge of the industrial estate. If only all birdin' was this easy! 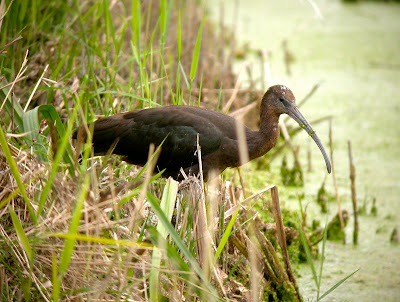 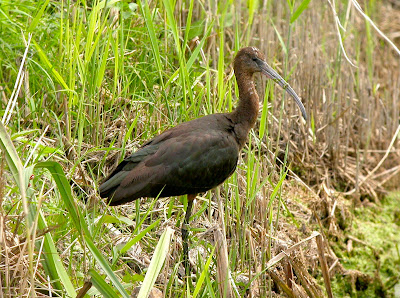 This Somerset bird carries a white coloured ring on its left leg with the black lettering R9T on it. On its right leg it also carries metal ring engraved with the number 713171. Apparently this bird is at least three years old and it was originally 'blinged up' in southern Spain during 2007. This bird was initially part of an influx of 20 GLOSSY IBISES that turned up at Budleigh Salterton in Devon on the 7th September. Six of these birds were colour ringed in Spain. The flock remained in the area until the 12th September but on the 13th September only a pair of birds remained in Devon. Later that same day a flock of 16 GLOSSY IBISES were located 225 miles to the east of Budleigh Salterton at Dungeness RSPB. This group remained in the area until the 15th September. 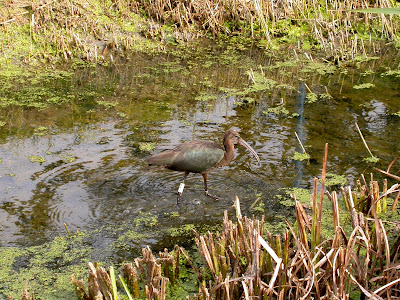 GLOSSY IBIS - Avonmouth, Somerset - September 2010
Photo by Adam Archer
Just to prove how tame this particular GLOSSY IBIS was, I took the above photograph with a handheld Nikon Coolpix 4500 with just an 4x optical zoom.
Posted by archiesbirding.blog at 17:44