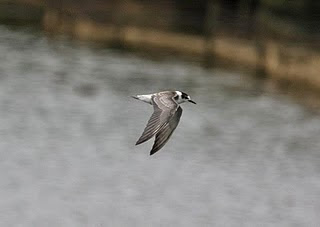 juvenile Black Tern - Kingsbury Water Park, Warwickshire - September 2010
Photo kindly provided by Bob 'The Birder' Duckhouse
A casual stroll around the Broomey Croft section of Kingsbury Water Park today was very enjoyable indeed. The sun was shining, the birds were singing and there was hardly anyone else milling around.... perfect. On Cliff Pool there were at least 6 Little Egrets feeding towards the channel end of the pool. In addition there was an impressive total of 112 moulting Northern Shoveler as well as a noisy Common Kingfisher and a single Greenshank. As I made my way up to the Skan Hide a juvenile Black Tern flew over the footpath.... superb. This bird then continued to show very well feeding around Cliff Pool for a while before heading off to check out other areas of the Tame Valley. The only passerine species of note were a couple of Willow Tits calling along the canal. 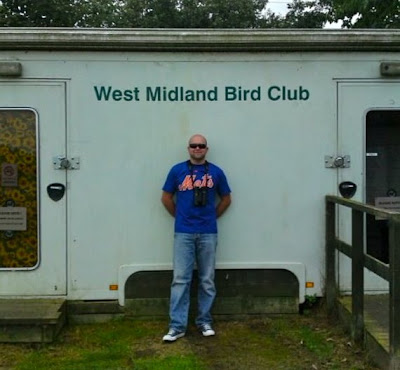 White trailer park trash! This is me outside the WMBC head-quarters at Kingsbury Water Park.
I then called in at Middleton Hall but I failed to get as far as Middleton Lakes RSPB. The nice new picnic benches in the meadow proved far to comfortable to ignore and so I just sat around watching Common Buzzards, Jays, Jackdaws, Rooks and Common Ravens going about their business. 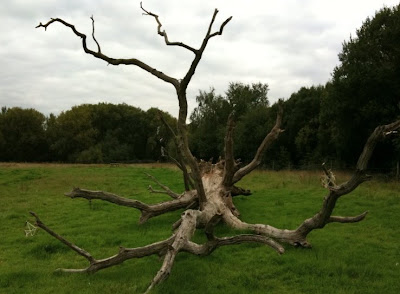 Check out this dead oak and the strange attachments at the end of the twisted branches. Is the RSPB resorting to witchcraft in order to attract new members these days? Maybe the new picnic benches double up as sacrificial altars where young virgins are offered to Anzu the Raven God!