300 at last! ROUGH-LEGGED BUZZARD in Lincolnshire 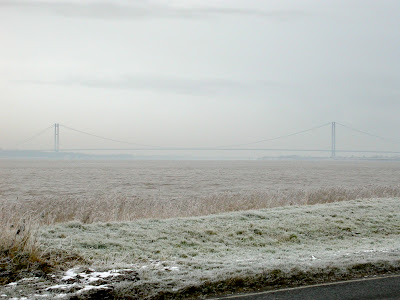 The Humber Bridge viewed from South Ferriby, Lincolnshire.
Well that's it, 300 genuine British bird species notched up during 2010.... and with over a month to spare too.  After missing out on the Hatfield Moor bird a few weeks ago, I decided to head up to South Humberside this morning for a slightly more reliable ROUGH-LEGGED BUZZARD.  During the drive across the temperature dropped to a chilly -7oC and the road conditions were pretty scary.  As we approached the River Humber, the snow became deeper and the highways became icier but we had to struggle on.  As we carefully pulled into the layby just west of the huge cement works, an obvious Buteo silhouette graced a nearby chain-link fence, a quick glance through the bins confirmed that it was the species we had hoped for. 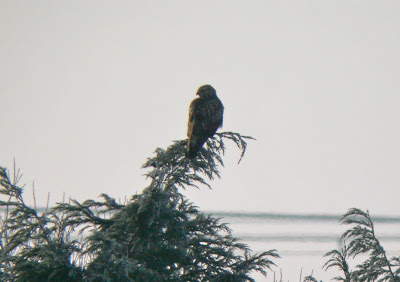 ROUGH-LEGGED BUZZARD (juvenile) - various dodgy record shots of the obliging bird on some of its favourite perches. 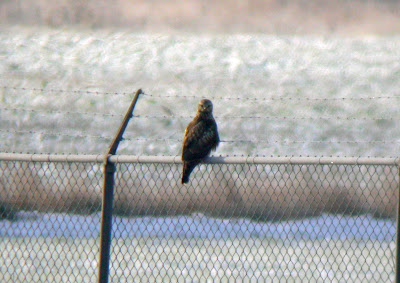 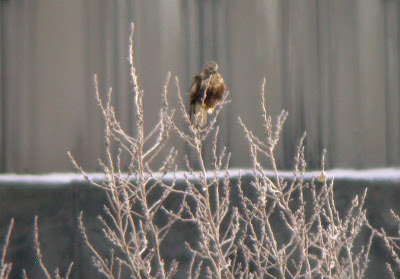 This scarce raptor from Northern Europe showed and performed superbly whilst we dithered in the extreme temperatures.  It pulled out all the stops in order to entertain us by posing upon various perches, taking short flights around the area, hovering in the chilly breeze and even pouncing on unsuspecting prey items.  It may have not been one of the rarest species to reach 300 with but it was certainly one of the most memorable sightings of the year.
Other species in the area included a flighty flock of around 1,000 Pink-footed Geese feeding in the adjacent fields, a Common Buzzard and 2 male Goosander on the Humber.  The only waders of note were the odd Eurasian Curlew, a few Common Redshank and good numbers of Dunlin.
After a quick thawing out session in the car we then drove the short distance to Far Ings LWT reserve.  We failed to locate a drake Smew due to the onset of a severe snow blizzard but a few Bearded Tits were heard 'pinging' around the reserve.  As the weather deteriorated it was time to head west out of the snow before we became stuck for the night. 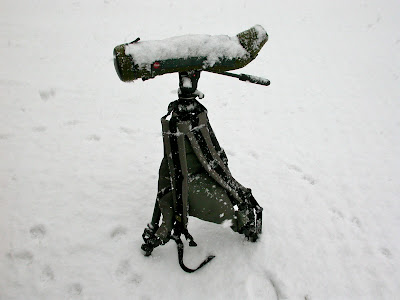 My beloved 'telesnowpe' and 'snowpak' at Far Ings LWT.
Posted by archiesbirding.blog at 21:28