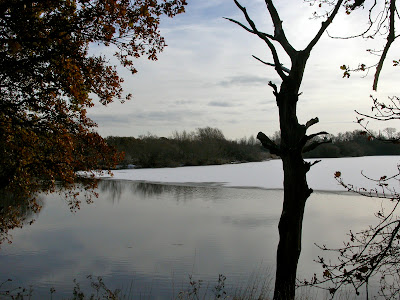 A mostly frozen Pretty Pigs Pool at Alvecote Pools SSSI - November 2010
A couple of patch MEGAS were reported during the week but with it being horrible and dark when I head to work and with it being even nastier and darker when I finish, there was no I could pay either of them a visit until today.  Initially it was not looking too good amongst the snow and ice.  There was no sign of the female Greater Scaup on a frozen Pretty Pigs Pool and there was just the regular escaped drake Hooded Merganser and the even dodgier Whooper x Mute Swan hybrid to keep me entertained.  There were plenty of Fieldfare and a few Redwing around the Old Orchard and the odd Lesser Redpoll passed overhead.
Hoping that the Red-breasted Merganser was still on Mill Pool, it was this area that I visited next.  There was no sign unfortunately but I was thrilled to eventually locate the female Greater Scaup amongst the Common Pochard and Tufted Ducks in the extreme north-west corner of the lake.  Also in the area were 9 Common Shelduck, a drake Goosander and 6 Common Snipe.  A trio of Little Egrets were also a nice surprise flying north at midday.  Over on Upper Pool there was nothing of note except a female Goosander.  Whilst strolling around Gilman's Pool the MEGA alert sounded on my pager..... there was a drake BAIKAL TEAL in Cambridgeshire..... I needed to make a move!
Posted by archiesbirding.blog at 19:13