We had originally planned on taking a more relaxed and civilised trip back up to Cleveland today for a second look at the WHITE-THROATED ROBIN but with negative news during the morning plan B was put into action. We arrived at Wykeham Raptor Watchpoint in North Yorkshire at around 1.00pm to find a small gathering of birders staking out the area. A number of Honey Buzzards and Goshawks had already shown on and off but with the forecast of rain later in the afternoon we needed to score fast.
Initially only a Common Buzzard was picked up in the distance but after a bit of patience our first Honey Buzzard flapped into view over a distance copse. This individual then gained height and attracted the attention of another bird. As the birds ventured closer we could see that they were in fact rival males. It was at this stage that one of the birds started 'wing-clapping' and before we knew it yet another Honey Buzzard appeared. For the next hour or so every birder present was entertained by the trio as they put on one of the best raptor performances I have ever witnessed in Britain. On a couple of occasions they passed directly overhead no more then 60 feet away, it really was an incredible sight. 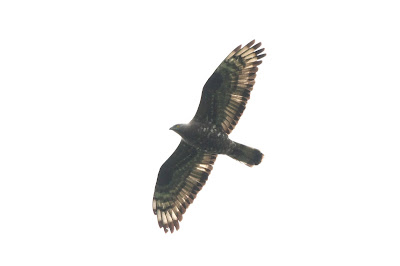 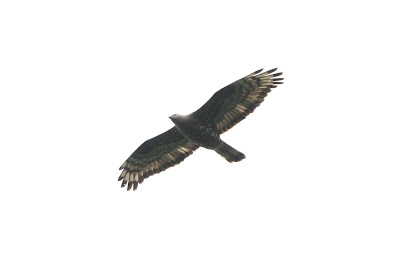 The Honey Buzzards obviously stole the show but there was also a fine supporting cast. We also spotted several Common Crossbills passing overhead and a singing Garden Warbler was nice to see around the watchpoint. We then made our way around to the forestry nurseries nearby where we eventually connected with at least four different Turtle Doves, unfortunately a very scarce sight in Britain these days. We failed to see any Goshawk during the afternoon but after the spectacle we had just witnessed we could not really complain too much. 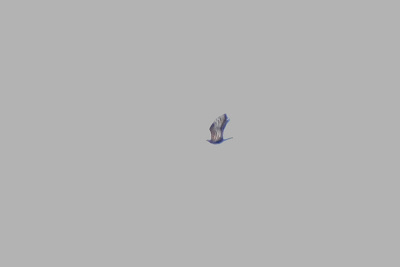 The distinctive shape of a 'wing-clapping' Honey Buzzard at Wykeham Raptor Watchpoint.
Photo kindly provided by Roy Harvey
To finish off a fine afternoon we then headed the short distance into Scarborough for a quick brew and an opportunity to check out a few seabirds. Around the seafront, several pairs of Kittiwake could be found breeding on the buildings housing the amusement arcades, ice cream parlours and tacky gift shops however the cliffs along Marine Drive were far more impressive. Amongst the hundreds of breeding Kittiwakes in this more natural setting there were also a few pairs of Northern Fulmar and the odd Rock Pipit. A rather obliging Red Fox was also spotted hunting around the base of the cliffs. The highlight however was stumbling upon a Peregrine breeding site. A powerful female caught a local racing pigeon and then patiently attempted to coax a well developed youngster down from its favourite ledges with the tasty morsel. As the rain eventually set in for the evening we made our way to a fine fish and chip shop near the famous Grand Hotel for a slap up supper of haddock and chips. British birding at its very best folks. 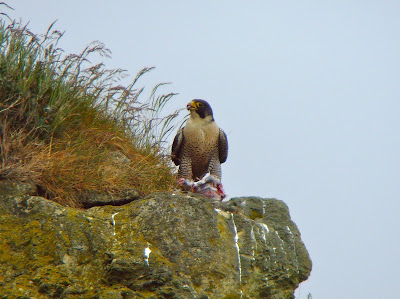 Peregrine - Marine Drive, Scarborough, North Yorkshire - 11 June 2011
Photo by Adam Archer
Please note that all photographs are copyright protected by the photographer stated. Please do not use or reproduce them without prior permission.
Posted by archiesbirding.blog at 19:15