AMERICAN WHITE-WINGED SCOTER - A photo study of an immature drake

Not surprisingly due to the distances involved and the choppy sea conditions there are not a great deal of photographs available of Britain's first ever AMERICAN WHITE-WINGED SCOTER at the moment. After scouring the internet I managed to find these superb images by American photographer Christopher Taylor. These pictures show an obvious immature male deglandi that was photographed during the month of February presumably in the bird's second year. The head shape seems to be in keeping with my observations of the bird in Aberdeenshire however the basal knob was considerably more enlarged in the British bird in comparison to the individual below. Could this be down to our bird being around four months older than this individual possibly is?
Anyway, for anyone who is still thinking of making the trip to Aberdeenshire, I hope these pictures help you with 'getting your eye in' and assist you making your trip a worthwhile one. 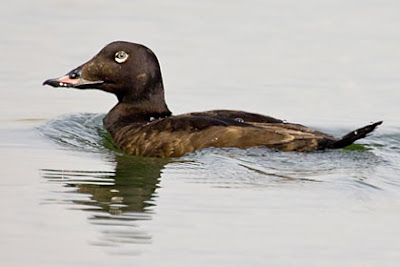 Note the distinctive peaked forehead of American White-winged Scoter. Any Velvet Scoters encountered should show a more evenly rounded head profile. Note also the obvious brown flanks a feature that was quite difficult to pick up on the Scottish bird when we visited due to the poor light conditions. 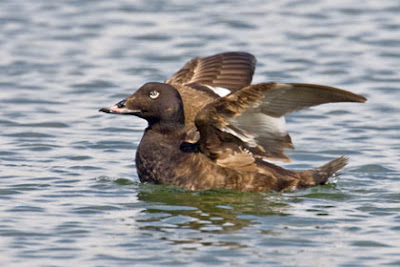 Even at quite a distance the greyish-pink wrap around to the bill could be seen on the Scottish individual as could the small white sub-ocular mark around the eye. As we are dealing with an immature bird here this marking lacks the strong, upswept tail that an adult drake would show. As the bird flaps you can see the white secondary panel that gives the bird its name. Whilst on the sea and with the wing closed there was often no visible sign of this feature on the Scottish bird. 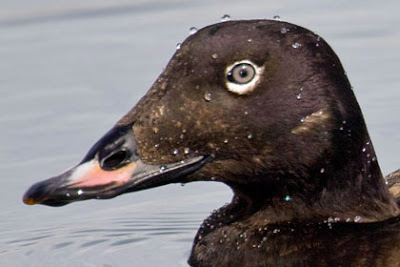 On this close up shot of the head you can just about make out the forming of a basal knob on the bill. As the bird matures this will progress into a distinctive 'step down'.
Posted by archiesbirding.blog at 22:28