The Unfortunate Isles - From Sea Watch to Bay Watch! - Day 3 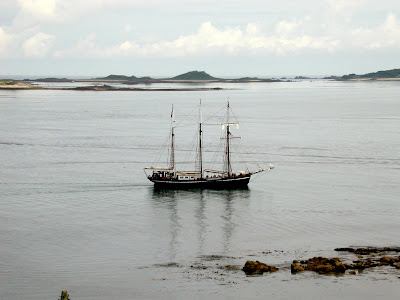 An old Clipper navigates The Roads on its approach to Hugh Town harbour.
After last night's festivities in the Scillonian Club where we enjoyed a fair few drinks, live music, ridicule from a drunken local and free power to charge our mobile phones, it was a struggle to wake up too early this morning. There was another pelagic planned for today but this time Bob Flood had advised us that instead of the usual tactic of drifting off Poll Bank the Sapphire was going to infiltrate an armada of French trawlers that were positioned north east of the Islands. None of us could summon up too much enthusiasm for the trip based on yesterday's sightings but dare we not go? It was a huge gamble but in the end the decision to stay on St Mary's and save a combined £135.00 was unanimous.
So after an expensive breakfast we made our way up to The Garrison and decided to find our own seabirds off Morning Point. The trouble was that the conditions for sea-watching were not ideal, zero wind in any direction and glorious sunshine. Around the Point family parties of Sandwich Tern were resting on the rocks during low tide along with a few Oystercatcher and Ruddy Turnstones. Further out at sea it was not too long before I spotted our first Basking Shark of the day. 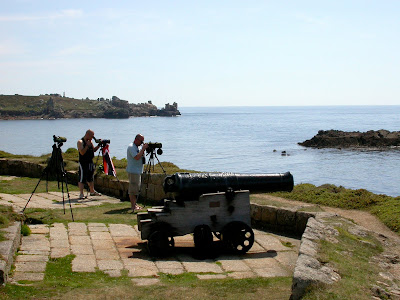 Sea-watching off Morning Point, St Mary's.... sea is pretty much all that we watched! 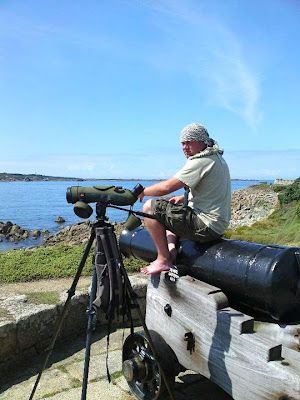 Who needs Johnny Depp when you've got Archie Sparrow on the case?
With nothing more to interest us than the usual Laridae, a 1st winter Kittiwake and a distant Manx Shearwater it was little wonder that our concentration started to wain. Whilst Mike and I enjoyed butterflies and macro moths and discussed the unique biology of the plant Anagallis arvensis, Stevie filled up his time by scoping semi-naked posh women sunbathing aboard their yachts. Kids hey? It was time to clear our minds of birds and make the most of our time on St Mary's. It was time for a dip in the sea. 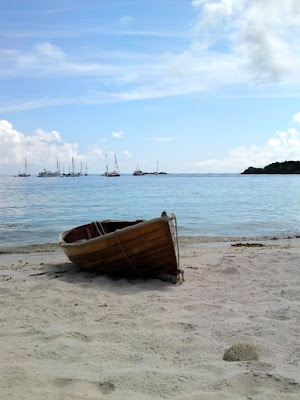 An arty shot of a pretty wooden rowing boat on Porthcressa Beach.... check out the rich folks in the distance.
Heading back to camp to retrieve our swimming gear we made our way to Porthcressa. Whilst strolling down to the beach a Hummingbird Hawk-moth was spotted feeding on a Buddleia near the old coastguard buildings. It is always a cracking, little creature to connect with during the Summer months. Within seconds of hitting the beach I was in the water with no hesitation, quickly followed by Mike. After the initial heart stopping shock of the bitterly cold Atlantic Ocean it is amazing how quickly your body aclimatises to its surroundings. I looked around for Stevie but he was nowhere to be seen. He soon confessed to having a phobia of the sea but after a bit of coaxing him around he eventually summoned up the courage to take a paddle. It was amazing to think that he had never even dared do that before in his thirty odd years on this planet. Despite him shrieking like a petrified Alan Carr as a bit of seaweed brushed past his leg and despite his camp little Julian Clarey style run back to the beach, we were both very proud of him indeed. Kids hey?
A pleasant afternoon was topped off watching an impressive Manchester United beat the rent boys in the Charity Shield followed by a new Scilly tick - Common Swift. A mixed flock of around 30 birds gathered together with around15 Barn Swallows near the football pitch briefly before dispersing and continuing their migration south.
Now comes the horrible bit and proof that the curse continued. News eventually filtered through regarding the pelagic that we ignored. The good news was that no WILSON'S PETRELS were spotted again however the bad news for me was that a single Great Shearwater showed well for a while. This is a species I have always failed to connect with in British waters so I was slightly gutted... but then again I had saved myself £45.00. 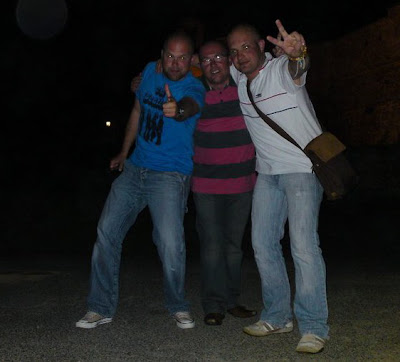 The Beastie Birders - Licensed To Ill....No Sleep Til Bedtime!
Posted by archiesbirding.blog at 16:05