During our time on the Isles of Scilly, the two Nottinghamshire residents that I was with had a little calidris niggle at the back of their minds. Whilst we were leaving Penzance last Saturday news filtered through that a Little Stint at Lound had been re-identified as something a little spicier - an adult BAIRD'S SANDPIPER. Would it linger until we got back to the mainland? Probably not knowing our luck! 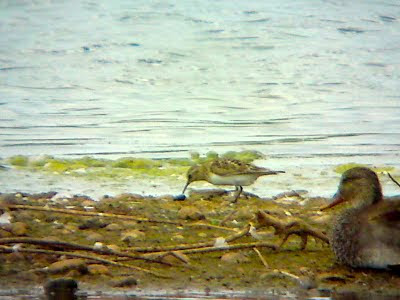 adult BAIRD'S SANDPIPER at Lound, Nottinghamshire.
Photo blatantly thieved from Stevie Dunn.
I eventually hobbled on site during mid-afternoon to find both Mikipedia and Nottsferatu already on site at the Chainbridge Lane viewpoint. Within seconds I was watching my first ever adult BAIRD'S SANDPIPER (259) in Britain, all my previous sightings being fresh autumn juveniles. The bird showed well if not a little distantly during our visit. Before we left a Black-tailed Godwit flew in followed by a Dunlin as a useful comparison species. It was great to see plenty of Northern Lapwings at this impressive site too. On the other side of the lane I eventually found a group of 20 Red-crested Pochard amongst a few Common Pochard and Tufted Ducks.
BAIRDS SANDPIPER fact file
Posted by archiesbirding.blog at 13:10