Whilst away birding on the south coast on Friday for a few days, I received a text from Tom Perrins to advise that Steve Haynes had found a Kittiwake at Shustoke Reservoir. This is a species that I have only every encountered passing through the local patch during appalling weather conditions. My sightings have always been fleeting in Warwickshire so when Tom mentioned that this particular bird was showing down to a few feet then I was just a little bit envious.

So two days later I visited a somewhat calm and bright concrete basin on the outskirts of Coleshill not at all positive that the bird would still be present. Despite a good scan from the car park, initially there were few gulls around, just the odd usual Black-headed Gull. I was just about to head back home when all of a sudden a stunning second winter Kittiwake appeared from nowhere and landed right in front of me.

It then noticed a few 'duck feeders' further around the reservoir and promptly flew over to investigate. There it raided the resident Mallard flock in order to secure a few tasty morsels for itself. At this point I was joined by Dave Hutton and we both managed to run off a few photos for fifteen minutes before it began another circuit of the reservoir.

Whilst we were admiring our lost pelagic wanderer, news came through that a KILLDEER had dropped in at a reservoir up in Lancashire! As Dave needed this rare American wader for his British List he was itching to get up there and asked if I would be interested. Why not?  We headed up the M6 only for the bird to fly off as we approached Walsall. We promptly turned back around and headed back south only for the bird to return as we got back to Coleshill. It was a case of de ja vu as we once again steamed back up the M6.  Needless to say the bird flew off for a second time but we carried on regardless.

We eventually reached Alston Wetlands near Preston at around 1.15pm and there was still no sign of the KILLDEER. On site there were around 20 Lapwing, a single Little Ringed Plover, a pair of Oystercatcher, a trio of Common Redshank and the odd Curlew. As the bird had flew off to the north west we decided to give the nearby fields a grilling. Whilst we were doing this though I received a text message from Kay Donaghy. Her and Martyn Yapp had just stumbled across a female Bearded Tit on the Staffordshire/Warwickshire border and better yet it was showing exceptionally well. This is a species that leaves a glaring hole in my County List. We took the decision to head back south, the KILLDEER could wait.

At around 4.30pm we arrived back at Dosthill Lake and hurried around to a tiny pool just north of the waterski complex. Within a few seconds we were both enjoying incredible views of a stunning female Bearded Tit down to just a few feet, in fact some of the best views of this gorgeous species that we have both ever had in Britain. The bird continued to feed well around the small patch of phragmites where Dave managed to secure some excellent photographs. Moral of the story, sometimes it pays off to stay local and enjoy your birds instead of being tempted to chase those pesky MEGA rarities. 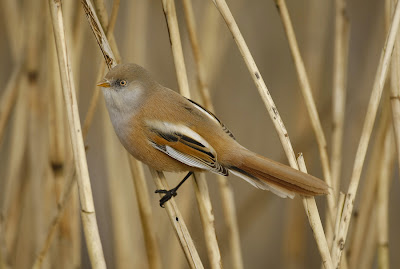 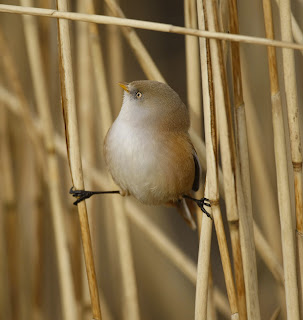