With some time off work and not a great deal on the mainland to get excited about, we decided upon a quick trip to Suffolk for a 'first record for England'. I had already added SANDHILL CRANE to my British list a couple of years back with an epic trip to Orkney. Click HERE for a run down on how that particular twitch went. This trip however went a whole lot smoother and despite the bird being all the way over in Suffolk, it was considerably closer to home than my last experience of this species in Blighty.

After waiting on news before travelling we headed east at a steady pace. With the bright and clear weather conditions looking pretty good for the bird to take off at any time the long drive over was quite stressful especially as it had been in the area for a whole five days already. I had visions of it soaring high on the thermals and disappearing towards the Netherlands at any moment. We finally arrived on site at around 1.00pm and were told that it flown and disappeared out of sight amongst some cattle. It was not too long however before the bird strutted into view, an elegant yet very distant SANDHILL CRANE.

Not satisfied with the far off views, we made our way down towards the sea wall to see if we could get a little closer. With a little patience and using a hay bale as shelter from the strong breeze we were eventually rewarded with some great views as it fed out in the open in a recently tilled field.

After enjoying the spectacle for a while we headed off along the sea wall where we picked out a few more species for the day. Highlights included a single Dark-bellied Brent Goose, 30 Wigeon, 6 Little Egret, 25 Black-tailed Godwits, the odd Curlew, 2 Snipe, a scattering of Redshank and Dunlin as well as a single Wheatear.

After a bag of fish and chips in the picturesque village of Aldeburgh it was then time to head back home. A thoroughly enjoyable day all round. 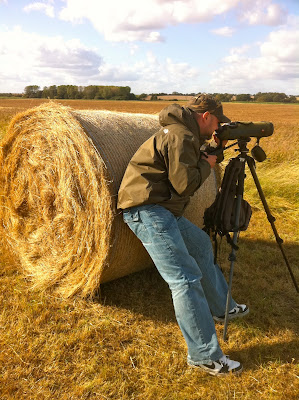 The 2011 Sandhill Crane's movements in Britain

This bird may well have been the same individual that was initially spotted in Finland as it flew south-west over Espoo on the 5 September. It was then located in Estonia the day after where it stayed until the 8 September. The movements in Britain however are as follows: